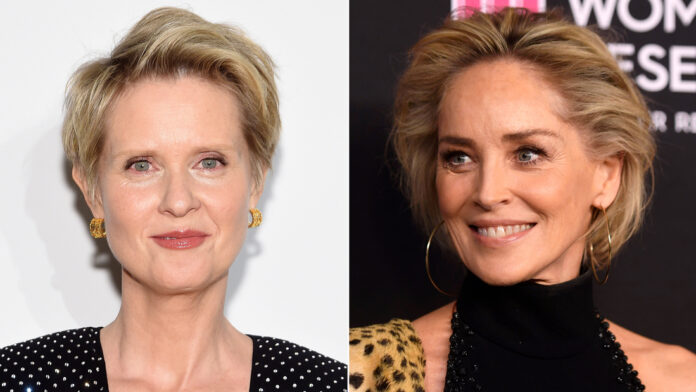 The pair appeared virtually, alongside actress Sarah Paulson, Wednesday on “Watch What Happens Live with Andy Cohen” and talk turned to Stone’s name coming up as a possible replacement for Kim Cattrall, who has played Samantha.
Catrall famously does not get along with “Sex and the City” star Sarah Jessica Parker and has made it clear she has no interest in appearing in another sequel, should that happen.
Stone said she was aware of the conversation.
“I did not hear about it, but any time I could have an opportunity to work with Cynthia would be an honor to me,” Stone said.
Nixon, who played Miranda on “Sex and the City,” recounted a pleasant Emmy Awards show moment when the four cast members were presenting and Stone was on after them.
“Sharon Stone came out to present her award and just spontaneously said ‘Look at the ‘Sex and the City’ girls, don’t they just look like a bowl full of candy,” Nixon recalled. “We just went to seventh heaven at that point.”
Nixon gave a thumbs up to Stone as Samantha.
“I think Sharon would be, of course, totally amazing,” Nixon said. “Kim was incredibly great as Samantha, I think Sharon would totally make it her own.”
“I’ve also heard many people say, including Kim Cattrall herself, that if we were to have a different fourth woman that maybe it would be a woman of color this time and I think that would be amazing as well,” Nixon added.
Cattrall addressed making the cast diverse in a 2018 tweet response to a report that Parker jokingly suggested talk show host Ellen DeGeneres as a replacement.
“I am partial to @TheEllenShow but @Oprah was always my 1st [love],” Cattrall tweeted. “But then there are the goddess’s @TiffanyHaddish or @SofiaVergara So many fabulous actresses to choose from that will make Samantha their own!”
Cattrall is currently starring in the Fox series “Filthy Rich.”