Home Culture ‘A Wilderness of Error’ makes its own errors tackling the Jeffrey MacDonald... 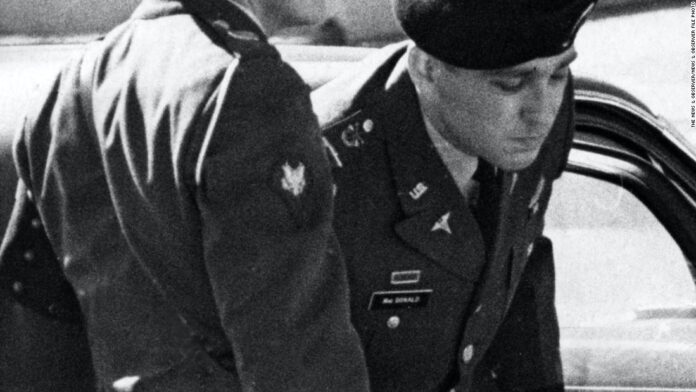 That question is articulated by documentary filmmaker Errol Morris, who prompted the exoneration of a convicted felon with “The Thin Blue Line” and later took up MacDonald’s story, seizing on conflicting evidence to write a 2012 book by the title used for the docuseries.
Yet even Morris acknowledges this was “a strange, strange, strange story,” including the “deeply bizarre” involvement of Helena Stokely, a woman who kept confessing to involvement in a way that would have cleared McDonald, but whose background made her testimony suspect.
For those who have forgotten the details of the sensational murders, MacDonald, an Army officer and Green Beret, was charged with killing his wife and their two young daughters in 1970. MacDonald insisted that “hippies” had carried out the brutal slayings, just a year after the Manson family murders.
In many ways, the media component remains the most fascinating and distinctive part of the story, which is where “A Wilderness of Error” genuinely shines. That includes MacDonald’s oddly playful appearance on Dick Cavett’s talk show after initially being cleared, and later his relationship with author Joe McGinness, who MacDonald saw as a supporter — one who hung out with the defense team — only to have his book “Fatal Vision” essentially indict him before being turned into a widely seen 1984 NBC miniseries.
Director Marc Smerling has called the MacDonald case “the granddaddy of true crime,” and that’s largely true. But the series inadvertently underscores that by illustrating the genre’s excesses, mucking up sequences devoted to the trial and crime that look like recreated outtakes from “Law & Order.”
MacDonald has continued to profess his innocence, and his last attempt at securing a new trial was denied in 2018.
Morris’ observations serve as a sort-of spine for the series, but it’s a squishy point of entry, and the interview with him proves unsatisfying. Couple that with the vaguely sleazy aspects, and “A Wilderness of Error” offers a not-so-illuminating message that it’s sometimes difficult to get at the truth that’s not worth the five hours it takes to hear it.
“A Wilderness of Error” premieres Sept. 25 at 8 p.m. ET on FX, and the following day on FX on Hulu.