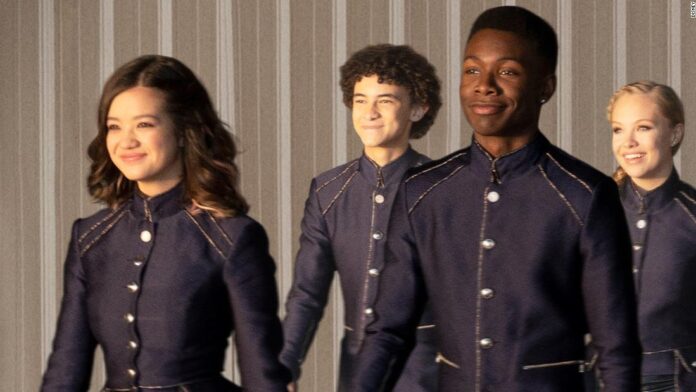 Starring Disney alum Peyton Elizabeth Lee (“Andi Mack”), the original concept borrows from the best, including “Frozen,” which actually excised a song about the whole “heir and a spare” dynamic of royal birth.
Lee’s Sam is the willful younger sister of the soon-to-be-coronated queen of mythical Illyria, and plenty irritated when their mother (Elodie Yung) ships Sam off to summer school. Yet what Sam sees as a punishment turns out to be a school to train gifted youngsters, whose powers (as a sort-of-consolation prize for not being king or queen) begin to manifest themselves in their mid-teens.
Sam is joined by other princes and princesses — a cast that includes Niles Fitch (“This is Us”) as fellow Disney Channel star Faly Rakotohavana (“Raven’s Home”) — with powers ranging from heightened senses (hers) to invisibility. They’re put through the paces by a more experienced second-born royal (Skylar Astin), including exercises in what amounts to a “danger room,” before the inevitable call to apply their skills in the real world, with actual lives on the line.
Directed by Anna Mastro (a veteran of such series as “Jane the Virgin” and Marvel’s “Runaways”), from a story credited to producer Austin Winsberg and writers Alex Litvak and Andrew Green, “Second-Born Royals” doesn’t contain many fresh wrinkles, including the mystery that surrounds a prisoner (Greg Bryk) bent on revenge against Sam’s family.
Still, it’s slick and generally solid comic-book-style fun, with uniforms and everything, as these youths discover their powers and Astin provides welcome humor as the group’s able if exasperated mentor. The story even weaves in a slightly weightier theme regarding the whole issue of royalty, without getting bogged down by it.
As an aside, this is actually the second solidly made streaming movie this week featuring a 16-year-old lead — which must be some kind of a record — coming days after Netflix’s Millie Bobby Brown vehicle “Enola Holmes.”
Like that film, “Second-Born Royals” also has the potential to become an ongoing franchise, meaning it wouldn’t be a surprise to see this society suit up again, the same way that “Descendants” or “High School Musical” did.
In the not-so-mythical kingdom of Hollywood, they call that sort of heir a sequel.
“Secret Society of Second-Born Royals” premieres Sept. 25 on Disney+.