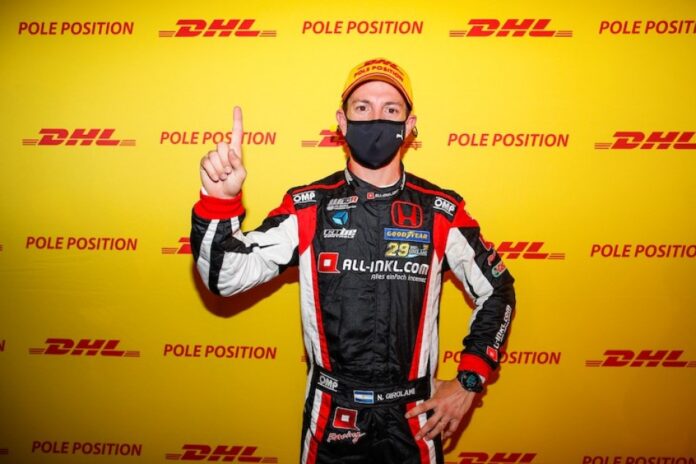 Girolami slashed Ehrlacher’s advantage to just five in his ALL-INKL.COM Münnich Motorsport Honda Civic Type R TCR after a final lap charge that pushed the Argentine to the top of the times and put him on the DHL Pole Position for Race 2. His time of 8m51.802s over the 25.378-kilometre lap was 1.163s faster than Ehrlacher’s best, after the Frenchman missed out on a final attempt by failing to pass the start line before the chequered flag was waved.

“That was one of the craziest things I have ever done in my life,” said Girolami after his stunning final lap in the fading sunshine. “The target was to score some points, but I felt so confident in the car I had to go for it and take some risks. The guys in the team deserve it. It was really getting dark and some parts of the circuit were difficult to see, missing the apex on some of the corners.”

Ehrlacher’s first lap in his Cyan Racing Lynk & Co 03 TCR was still good enough to be second fastest, in a session that was affected by the extended recovery time for Jack Young’s Vuković Motorsport Renault Mégane RS TCR, which was stuck in the gravel at the hairpin on the Grand Prix circuit loop.

Nathanaël Berthon was P10 in his Comtoyou DHL Team Audi Sport entry, landing him the DHL Pole Position for the reverse-grid Race 1.

Yvan Muller was P11 in his Lynk & Co ahead of Tiago Monteiro’s Honda, Gábor Kismarty-Lechner’s CUPRA and WTCR Rookie Driver contender Gilles Magnus, whose session was ruined by a mechanical problem on his Comtoyou Racing Audi RS 3 LMS. Young was classified in P15.