Home Culture Where does the media’s portrayal of bisexuality go from here? 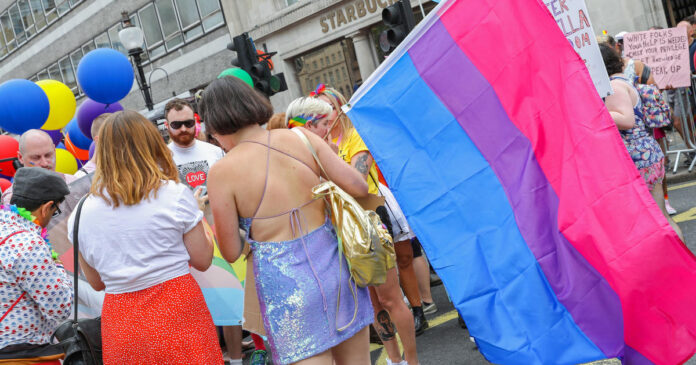 “Our show, at its core, is about the transformational effects of love and acceptance and that is something we need more of now than we’ve ever needed before,” said Dan Levy, writer and supporting actor from “Schitt’s Creek,” as he accepted the Emmy for Outstanding Comedy Series, on which he plays David Rose, an openly bisexual character.

In 2020, it is almost expected that a comedy series featuring openly gay characters could not only air but be celebrated enough to win every single Emmy award in its category. But while television and film have often pushed boundaries on stories surrounding gay and lesbian individuals, experts say bisexuality has often been left behind.

September 23 is celebrated as Bi Visibility Day, a worldwide holiday to “accelerate acceptance of the bi+ (bisexual, pansexual, fluid, no label, queer, etc.) community,” according to GLAAD. The day marks the end of Bisexuality Awareness Week, a holiday celebrated since 1999. For most, a basic understanding of the sexuality is one who is attracted to more than one sex or gender. But biases stemming from lack of knowledge, homophobia, and inaccurate portrayals in the media have left bisexual individuals fighting to reclaim their own narrative.

“Both of these assumptions are incorrect. The far more accepted definition is one made popular by Robyn Ochs, a prominent bisexual educator and author, who said that bisexuality is the potential to be attracted – romantically and/or sexually – to people of more than one gender, not necessarily at the same time, not necessarily in the same way, and not necessarily to the same degree.”

Bisexual individuals make up almost 50% of people who identify as part of the LGBT community, according to research from the Williams Institute at the UCLA School of Law. Nearly 3.5% of adults in the U.S. identify as lesbian, gay, bisexual, or transgender, which translates to approximately 9 million LGBTQ+ Americans. However, accurate media portrayal of bisexuality has long dragged behind data.

A year fraught with tropes that characterized bisexual people as flighty, unwilling to choose, in a phase, or worse, killed for the plot of the straight protagonist, 2016 marked a turning point in LGBTQ+ characters. It wasn’t just enough to have them, consumers wanted them to be accurate. In the past four years, series like “Sex Education,” “The Politician,” “Stumptown,” “Greys Anatomy,” “Brooklyn 99” have all been praised for their accurate portrayal of bisexual characters, films like “Call Me By Your Name,” “Colette,” “Atomic Blonde,” and “Booksmart” have featured explicitly bisexual characters.

For bisexual individuals unsure of their sexuality, experts say the representation they see on screen could make the world of difference. Bisexual people are more likely to have depression, anxiety, or other mental illnesses, according to a study from the San Francisco Human Rights Commission. Another Human Rights Campaign health brief found that bisexual people were more likely to commit substance abuse, have less emotional support and hide their sexual identity. The reason? One researcher points to minority stress theory, a model that says multiple public stressors and societal expectations can manifest negative reactions in minorities.

“I think (more accurate representation) is a big improvement because it’s part of a larger move in more recent television which tolerates non-binary identities,” said Katherine Sender, a professor with Cornell University’s Feminist, Gender and Sexuality Studies Program. “I see it as part of that bigger idea. In the past, being trans or being bisexual was extremely problematic within those binary categories. One of the things that’s happened, particularly in the rise of original programming on streaming services, like Netflix and Amazon, is there’s a much greater tolerance or acceptance of people being on spectrums and not having to fit into one or another end of a binary.”

Streaming programs have produced more bisexual characters than ever, but cable programs are still the most likely to show the most bisexual characters, according to the GLAAD report. The inconsistency can most likely be attributed to the more common nature of bisexuality on screen. Shows on original streaming services are more likely to portray more than one LGBTQ+ character, while cable shows while portraying more LGBTQ+ characters overall, are more likely to feature one character per show, the report said. In all, representation, just like bisexuality, is a fluid spectrum. The decision to feature bisexuality, accurately or not, comes down to a myriad of factors, including writers, actors, showrunners, and industry heads. And while television might not intrinsically cover real life, experts say positive representation does have positive impacts.

“Diverse representation is important for everyone,” said Madison. “The more people are exposed to a variety of sexualities, especially in positive or affirming contexts, the more opportunities individuals have to figure their own identities out as well as broaden their viewpoints about others. Media content producers are products of the society they grow up in, and historically many were white, straight males. I don’t think positive bisexual representation was a priority until more individuals started asking, demanding, and celebrating it.”

4D theaters: The next dimension in film