Home Culture Celebrity splits are none of our business, but we still care 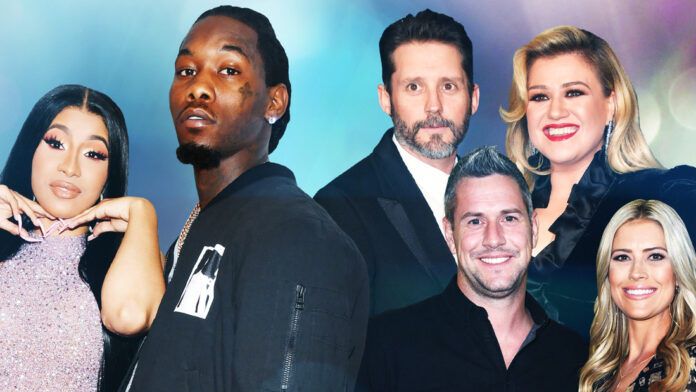 Three things to watch:
‘Schitt’s Creek’
Dying to see what all the fuss is about?
This comedy series swept the Emmys and makes for perfect binge watching.
Created by father-son duo Eugene and Daniel Levy, who also star in the series, it follows the wealthy Rose family as they find themselves down on their luck and forced to move to Schitt’s Creek, a town they purchased as a joke.
Those who love it, really love it.
All six seasons of the series are streaming on Netflix.
‘Goodfellas’
In honor of the 30th anniversary of the mob movie to end all mob movies (how has it been that long?), you need to slice some garlic cloves for your marinara with a razor blade and hang out this weekend with Henry Hill and the boys.
Anyone who knows me knows that I am kind of obsessed with “Goodfellas.” (I rewatch it weekly, seriously.)
I shared an essay about my devotion to the Martin Scorsese film for the CNN podcast “Lisa, Sandra and Kristin Go to the Movies.”
“Goodfellas” is currently streaming on Amazon Prime and YouTube.
‘Filthy Rich’
I’m a fan of trashy TV.
CNN’s Brian Lowry described the Fox series as a bit of “a Franken-soap” about a mega-wealthy televangelist (played by Gerald McRaney) whose secrets come out after his death.
I love a good Southern Gothic drama filled with hypocrisy and illegitimate children, especially when it stars Kim Cattrall, one of the main reasons I was a devoted fan of “Sex and the City.”
The series airs on Sunday nights, and the first episode is currently streaming on Fox Now.
Two things to listen to:
It has been 22 years since its last studio album, but Public Enemy is making up for lost time by releasing a new album on Def Jam.
“What You Gonna Do When the Grid Goes Down?” is jam-packed with collaborations with other hip-hop royalty like the Beastie Boys, Nas, Ice-T, Run-DMC and Cypress Hill.
This latest album is worth it just for the single “Fight the Power: Remix 2020,” the visual of which debuted this year as the opener for the BET Awards.
And don’t you worry about that little feud between Chuck D and Flavor Flav as it was all a stunt, according to Chuck D.
The new album drops Friday.
Carrie Underwood may have had to share the Entertainer of the Year award at the recent Academy of Country Music Awards, but this week her music won’t have to share the spotlight.
Her new album, “My Gift,” is out Friday, and it’s her first-ever collection of holiday music.
She’s got some special guests joining her, including John Legend and her 5-year-old son, Isaiah Fisher, as she croons some Christmas classics.
Yes, Halloween isn’t even here yet, but I’m not mad about any attempts to hurry up and get to the end of 2020.
One thing to talk about:
Much love to my colleague, Sandra Gonzalez, who was the mastermind behind one of my favorite things about this year’s Emmy Awards — the Room Rater critiques.
I’ll admit to being disappointed that Claude Taylor and Jessie Bahrey, who run the Twitter account @ratemyskyperoom, didn’t notice me enough to rip apart my bookcase backdrop featuring a stuffed teddy bear during my last CNN appearance.
But I absolutely loved their observations on the rooms during this year’s virtual Emmy Awards.
I need whoever designed the room for the “Schitt’s Creek” cast to come light up my life. Please and thank you.

Dear Hilary Duff, your husband really loves you.
Matthew Koma recently revealed on Instagram that he had his wife’s name tattooed on his behind.
Yes, you read that correctly. His left butt cheek now reads “Hilary.”
Now, I don’t know if “tattoo shaming” is a thing or not.
However, allow me to say that while I understand being in love, I have to interject a but here (applaud me for being so clever with my phrasing, please) and add that this feels very late 1990s/early 2000s.
I thought we had tossed out inking our bodies with the names of our partners along with sex tapes and Nerds candy.
Perhaps it was a gag meant to entertain Duff and us, but it sure looks real. To me it was a great reminder that our decisions can be long-lasting and everything is not for everybody.
Yes, I am now culling life lessons from derriere tattoos. So, thanks, 2020.
Mr. Koma, if you felt it was your duty to proclaim your devotion on your booty then God bless.
Duff can’t ever say you weren’t willing to publicly go there.
Pop back here next Thursday for all the latest happenings that matter in Hollywood.