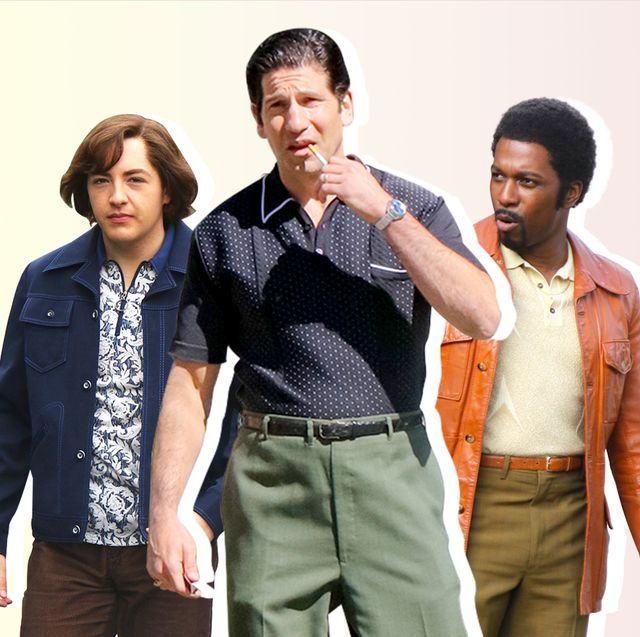 Whoo, boy. Where my Sopranos heads at? Ready yourselves, people. Because stills from the set of The Many Saints of Newark dropped online today, and they’re worth poring over. TMSN is a prequel of sorts—centered around the 1967 riots that took place over a four-day period in the city of the same name—loosely based on the show that quietly ushered in an era of dark, gritty Prestige TV. A young Michael Gandolfini is set to make his big-screen debut reprising the role that made his father a household name, but beyond that, details on the upcoming flick remain fairly scarce. (The movie was initially slated to hit theaters this month but was rescheduled to release in March of 2021.)

Until then, diehard devotees of the series will have to make do with a sneak peek at the film’s costume design. And oh, what a peek it is! I’m talking pointy, period-appropriate collars, heavily flared pants, and enough thick (thicc?) knit polos to make you pine for sweater weather wherever you are. (Newsflash: It’s here!) In other words, it’s all the seasonal inspiration you need right now in one handy-dandy place. Shit, man. At this point I could care less how well the damn thing upholds the show’s legacy. I’m here for the fits, and the fits alone.

Still not sure how you feel about Hollywood milking your all-time favorite series for all the money it’s worth? Take a look for yourself. (And then maybe consider watching something else, y’know, for variety’s sake. I’ve heard this whole “TV” thing has really taken off.) As always, no need to wait till the movie actually drops to really start dressin’.

Michael Gandolfini in a pair of pants for the history books.

Do yourself a favor and buy a version of everything Gandolfini is rocking here, and then wear ’em all to death this fall.

I mean, shit, you could wear this outfit piece for piece right now and I wouldn’t have single problem with it.

Fuck it. I’m sold. Give Jon Bernthal the Academy Award and call it a day.

Scarily mature-looking kids who’ve definitely seen some shit and also dress like your swaggiest grandparent? Now that’s an idea for a series.