Home Culture Jeff Daniels would have played Trump in ‘The Comey Rule’ but he’s... 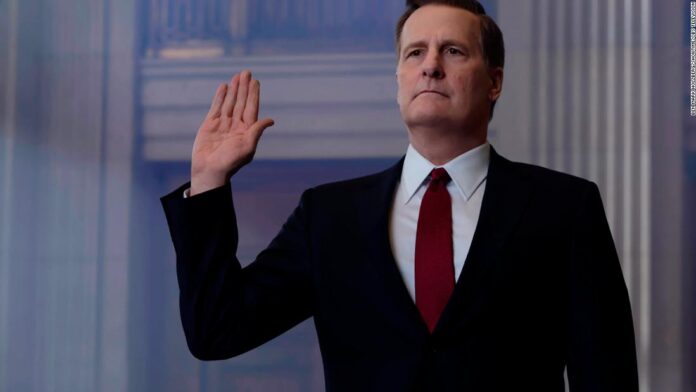 In Showtime’s “The Comey Rule,” premiering Sept. 27, Daniels brings to screen some the events detailed in the former FBI director’s book “A Higher Loyalty,” including the embattled period prior to and following the election of President Donald Trump.
One of the key scenes in the two-part television adaptation from writer and director Billy Ray and is referred to by those involved with the production as the “loyalty dinner scene.” It finds Daniels’ Comey sitting opposite actor Brendan Gleeson as Trump at a loaded dinner during which Trump, according to Comey, asked him for a pledge of loyalty.
On set, it was the first time Daniels and Gleeson had ever shared a scene together. They hadn’t even rehearsed together.
The scene was eight and a half pages long, and they’d both arrived with it all committed to memory so they wouldn’t have to break the moment.
“It’s like working with people like Meryl [Streep],” Daniels, who starred in 1986’s “Heartburn” with Streep, told CNN. “They make it look so easy. It was beautiful to watch.”
Around the corner watching on a monitor was another person who knew the scene well — the real Comey.
Daniels knew he was coming to set but didn’t know Comey would be watching.
At 6’8” Comey is an imposing figure. At 6’3” himself and wearing 2-inch lifts in his shoes at the time for the role, Daniels is not used to looking up at people. In this case, he remembers his neck craning.
“He said that I brought back all the emotional turmoil that he felt, and he used the word nauseous,” Daniels said. “He said, ‘It made me feel nauseous,’ which usually for an actor is not a good compliment. I felt that it was a good thing for him to say. Mission accomplished.”
As far as feedback, knowing he’s “good” with Comey is enough for Daniels, a two-time Emmy winner.
“Trump, I could care less,” he said when asked if he was anticipating any sort of reaction to the project from the President.
In separate call with press, Ray, best known for writing “Captain Philips” and the first installment of “The Hunger Games” franchise, said he “wouldn’t want to expose any actor to the flack that I imagine Brendan is about to get from our current president.”
He added that Gleeson had initially turned down the role and it took him about a month to come around to the idea.
In that time, Daniel admits he briefly considered pitching a unique alternative.
“There was a moment — and I told my manager and my wife, Kathleen — I said, ‘Do you think he’d let me play both?’ Do one of those Patty Duke things, remember that?” Daniels said. “It didn’t get past my wife or my manager. And then Brendan came on, and I’m going, ‘Oh, good. Think of all the lines I won’t have to learn.’ That was my first thought.”
There was other talking Daniels was prepared not to do.
Earlier this year, “The Comey Rule” was given a post-election premiere date, much to the consternation of those involved with the project, including Daniels.
“When I found out, I was not happy. That’s not why I did it. That’s not how it was pitched to me, and it was unacceptable,” he said.
For his part, Ray fought his own battle behind the scenes and eventually wrote a letter of apology to the cast that some feel helped sway Viacom’s ultimate decision to move the premiere date. (Ray does not share that belief but thinks his letter gave the company “a little bit of cover,” he told press.)
Daniels, meanwhile, had been prepared to do his own version of a protest and not promote the project.
“As the one who was going to promote it, I felt that maybe someone should have talked to me beforehand, but they didn’t. So I said good luck with it. And that was it for me,” he said. “And then a few weeks later, I hear it’s going to be before the election. Terrific. Happy to talk about it now.”