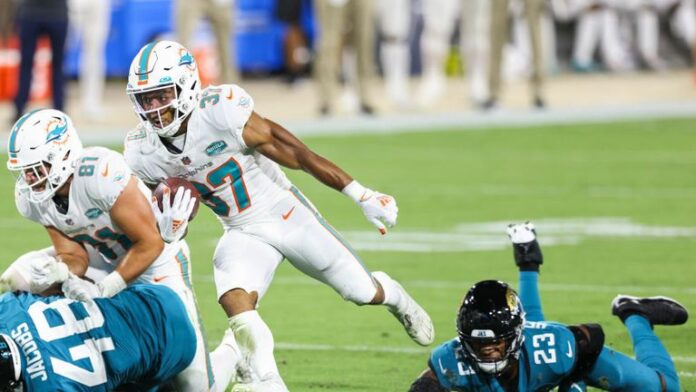 Ryan Fitzpatrick threw two touchdowns and ran in another at the goal line as the Miami Dolphins cruised to a comfortable 31-13 victory over the Jacksonville Jaguars on Thursday night.

Fitzpatrick completed 12 straight passes to start the night, extending his streak to 21 following Miami’s Week Two defeat to the Buffalo Bills; he would finish 18 of 20 for 160 yards as the Dolphins (1-2) registered a first win of the season.

In a match billed as the ‘battle of the beard and moustache’, Jaguars (1-2) quarterback Gardner Minshew had more yards – 30 of 42, for 275 through the air – but turned over the football twice, fumbling late in the third quarter and throwing an interception in the fourth.

Jacksonville’s undrafted rookie running back, James Robinson, impressed again, rushing for two TDs as he totalled 129 yards from scrimmage – 46 rushing, 83 receiving – but the Jaguars were always playing catch up after the Dolphins raced into a 14-0 first-quarter lead.

Miami set the tone by travelling 84 yards on a 12-plays opening drive that chewed up nearly seven minutes of the clock and ended with Fitzpatrick connecting with Preston Williams for a three-yard TD.

It was the first of three consecutive scoring drives from the Dolphins to open the game, with Jordan Howard first running in from the goal line to make it 14-0 and then Fitzpatrick tossing a 15-yard TD to tight end Mike Gesicki to restore the visitors’ two-score lead after Robinson ran in for the Jags.

Neither offence was particularly impressive in the second half; Kyle Van Noy forced and recovered a fumble from Minshew at the Jacksonville 10-yard line, gifting Fitzpatrick an easy score that all but ended the contest.

Robinson ran in for another touchdown with nine minutes to go in the fourth quarter, but Brandon Wright missed wide left with the extra point that would have made it a 14-point game, while Dolphins kicker Jason Sanders tacked on a 30-yard field goal and Minshew threw a pick late on.

The game was played in front of approximately 16,000 fans after the Jaguars made about 25 per cent of their stadium seats available in compliance with state and local protocols in the midst of the coronavirus pandemic.

Jaguars left tackle Cam Robinson was ejected from the game for making contact with an official after the Minshew fumble, while there are fears they have lost linebacker Leon Jacobs for the season after he was carted off the field on the opening drive with a right knee injury.