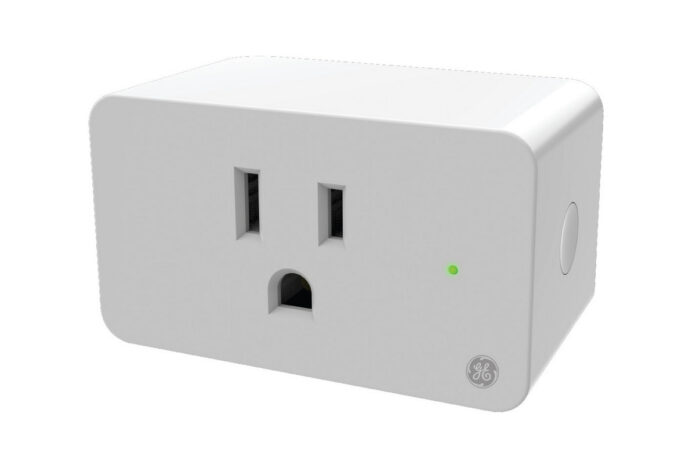 The C by GE On/Off Smart Plug is exactly as unassuming as its name suggests. The plug, a single-socket, three-prong model fits snugly into one half of a duplex outlet, leaving the other half free for another use (including another smart plug). You can use it to turn a connected load on and off—including small appliances such as a fan or space heater—but it can’t adjust a light bulb’s brightness.

A green LED on the front indicates when the plug is turned on, and a small button on the right side can be used as a manual on/off switch. The plug is rated for 15 amps, 150 watts, and/or a 1/3-horsepower motor. The Wi-Fi device only supports 2.4GHz networks, in keeping with the rest of the C by GE ecosystem.

This review is part of TechHive’s coverage of the best smart plugs, where you’ll find reviews of competing products, plus a buyer’s guide to the features you should consider when shopping for this type of product.

As with most plug-in smart outlets, there’s not a whole lot more to it. Setup in the C by GE app was quick and painless, with a short firmware update after initial pairing. From there, the plug can be assigned to a room, connected to an Alexa- or Google Assistant-powered smart device, and configured with an automation schedule as desired.

While it’s a fine option on its own that should work well in almost any environment, the most compelling reason to consider the C by GE smart plug is if you also use other C by GE products. Like its in-wall smart switches and dimmers, the plug is designed to automatically work in tandem with other C by GE devices if it is configured within the app to be in the same room.

That said, the products don’t actually need to be in the same physical room; you just need to designate them as such in the app. If you want to turn on all the holiday lights in the house at once, putting them all in the “Christmas” room is a handy way to do this with one tap.

The only hiccup I encountered with the plug was when I tried moving it from one room to another, inadvertently deleting it from the C by GE app entirely in the process. This was hardly a deal-breaker, though. It took all of 90 seconds to reset the plug and re-add it to the app.

Smart plugs are fully entrenched in generic status now, with most name-brand products hovering around the same $20 mark that the C by GE smart plug occupies. While there’s nothing in the way of extras here, such as energy monitoring features, its ability to work in tandem with other C by GE gear nudges it just slightly above much of the competition.