Home Sport Iceman playing ‘like the best in the world’ 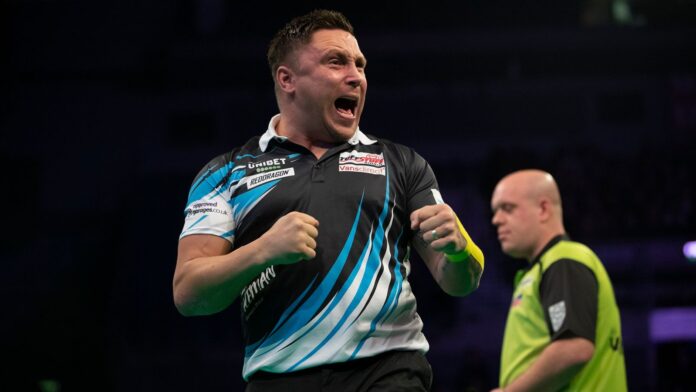 Download, subscribe and rate the latest episode of The Darts Show podcast via Spotify, Spreaker, Apple, Google or wherever you get your podcasts

Colin Lloyd believes Gerwyn Price is showing the form and the confidence to make him the best darts player in the world right now.

The Iceman has won the last three tournaments on the PDC circuit, including a third televised major title with his weekend victory at the World Series of Darts Finals in Austria.

Coupled with the last two events at the Autumn Series, titles that gave him the five-day Order of Merit crown, his winning run now stands at 17 heading into this weekend’s German Darts Championship.

The rankings have Price behind Michael van Gerwen and Peter Wright, but Lloyd, a former world No 1 and two-time major winner, is in no doubt about the best player on planet darts.

“Gerwyn is the best in the world right now and I say that because he is scoring very heavily and he is not missing doubles,” Lloyd told the latest episode of The Darts Show podcast.

“He looks very sharp, he knows what he wants to achieve and he is going about it in a very professional manner – and it is very good to watch.

“If he is misses a dart a double, he still has time because at the World Series it felt like he was on a finish after nine darts every single time – or a double after 12 darts.

“When someone is scoring as heavily as he is you are going to keep giving yourself opportunities to get a shot because someone is all the way back and Gerwyn will have another three clear darts at the double.

“People are now having to up their game to stay with him.”

Price, Wright and Van Gerwen are all in the field for the German Darts Championship and all three will be eyeing success at the next big TV event – the World Grand Prix, which is live on Sky Sports in October.

The last four months of the year is when the big prizes are handed out and Lloyd is expecting big things from the three men at the top of the tree.

“The one who is closest to him at the minute is the world champion – Peter Wright – their semi-final at the World Series was unbelievable and that’s because Wrighty has that belief too.

“There have been flashes of it from MVG, he still came second at the Autumn series and if Gerwyn hadn’t won two of those events, Michael would have won it so he isn’t playing too bad.

“He won’t be pushing any panic button, when he gets on his game he oozes confidence. Michael is the No 1 in the rankings and I know would look me straight in the face and say ‘I am the boss man, I am the world No 1’ and he is right.

“He is used to bullying people with his prowess around the darts board but there is a confidence thing that isn’t there for Michael right now And, for competiveness, finishing and most importantly results, it’s Gerwyn – he is looking fantastic.