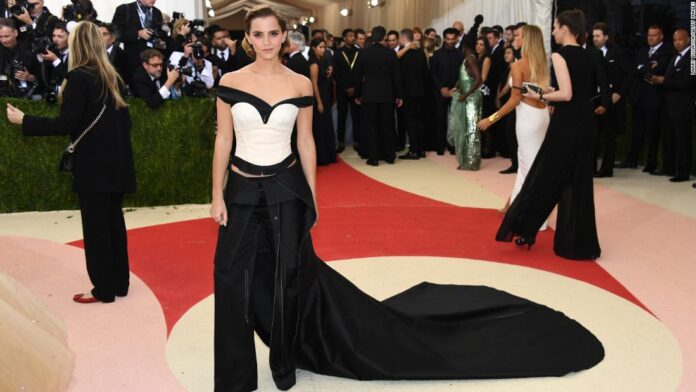 This story was produced as part of CNN Style’s The September Issues, a hub for facts, features and opinions about fashion, the climate crisis, and you.

Only just over a decade ago, sustainability in fashion was a fringe issue. But today, it has become a major talking point — even at important red carpet events, as evidenced by this year’s Oscars.

There, Joaquin Phoenix wore the same Stella McCartney tuxedo he had sported at the Golden Globes, Baftas and a number of other award shows this season in a bid to reduce waste. Saoirse Ronan appeared in a Gucci gown with a bodice made using the surplus fabric from her Baftas look. Costume designer Arianne Phillips was in an upcycled version of the Moschino dress she first wore at the 2012 Academy Awards. And that’s just to name a few.
Red carpet awareness has been slowly bubbling over the past decade, thanks in part to future-forward initiatives asking celebrities to wear more environmentally-friendly designs at major events. In 2009, climate activist and former actress Suzy Amis Cameron launched the Red Carpet Green Dress (RCGD) campaign, which runs a contest for young and established designers to create garments according to strict sustainability criteria. One year later, Livia Firth, founder of consultancy Eco-Age, followed with her now global Green Carpet Challenge, which not only encourages celebrities to dress sustainably at events, but also works with fashion houses on innovative materials and techniques.

Saoirse Ronan attended the 92nd Oscars in a gown made, partly, with leftover fabric from her Baftas dress earlier that month. Credit: Amy Sussman/Getty Images

In recent years, celebrities, in collaboration with RCGD or Eco-Age, have turned up in gowns made of recycled materials or dead stock, showing they can make statements about sustainability and look good while doing it. Some of these looks — as exemplified by Meryl Streep in Lanvin, Viola Davis in Valentino and Emma Watson in Calvin Klein — showed the possibilities of recycled beverage containers. Watson’s trouser-gown hybrid, which she wore to the 2016 Met Gala, was constructed using a yarn made entirely from used plastic bottles.

Viola Davis wore a Valentino gown for the Green Carpet Challenge to the 2012 Baftas. Its fabric was crafted from recycled materials. Credit: Richard Young/Shutterstock

Getting stars to make greener choices wasn’t a straightforward process, according to Samata Pattinson, the CEO of Red Carpet Green Dress. Initially, “it was really difficult to get talent on board with our campaign, because they had a limited view of what it would look like,” she said in an email interview.

“They were anxious, they didn’t know if it would look good. The assumption was that it would be hemp, something ‘granola.'”

But as awareness of fashion’s devastating impact on the climate grows, so too does interest from celebrities.

“The red carpet is one of the biggest storytelling platforms there is, and an opportunity to change conversations,” said Harriet Vocking, the chief brand officer of Eco-Age, discussing the Green Carpet Challenge in a phone interview. “Wearing a sustainable garment (at award ceremonies) has become a way to lead by example, but also challenge the current fashion system.”

Costume designer Arianne Phillips upcycled the Moschino dress she first wore at the 2012 Oscars (above) into a new gown for the 2020 ceremony (below). Credit: Ethan Miller/Getty Images

To date, Eco-Age has worked with more than 250 celebrities to shine a light on sustainability, although Vocking, like Pattinson, also spoke of having to persuade people at first, “as opposed to now, where we have incoming requests.”

Vocking pinpointed Watson’s Calvin Klein dress as a pivotal moment for the sustainable red carpet movement. “Watson propelled the dialogue to new heights, because her gown was so well-received by everyone, and showed that the quality is there to make stunning and sustainable dresses,” she explained. “It moved the needle on how we see sustainable fashion.”

Of course, there’s only so much a red carpet dress can do in terms of tangible change. What’s more, award shows themselves have a huge carbon footprint, with large amounts of energy required to stage them, and the waste left to be disposed of in their aftermath. Not to mention the air travel required of stars and their entourages.

The process of dressing celebrities for the red carpet is undeniably wasteful too, with custom-made gowns and jewelry flown over, only to be worn once, feeding into fast-fashion’s obsession with newness.

Thandie Newton wore a Vivienne Westwood dress to the 2018 Cannes Film Festival premiere of “Solo: A Star Wars Story.” The dress, created in collaboration with Eco-Age, featured hand-painted renderings of the Black characters in the franchise, and was made of organic ‘peau de soie’ silk and upcycled crystals. Credit: Pascal Le Segretain/Getty Images

Neither green carpet initiative has shied away from these inconvenient truths. Rather, they’ve approached sustainability from different angles.

“In the beginning, we were really looking at certified materials and sustainable design solutions with dyes for example, but (our ethos) has grown to include wider conversations (from) refurbishing and repurposing, plant-based or vegan materials, and using recycled plastic, to circular design systems,” Pattinson said. “It’s also grown to more visibly include a social justice element — how we are treating people within this industry and how we treat the people who make our clothes.”

Embracing vintage — a trend harnessed by Penelope Cruz, Margot Robbie and Kim Kardashian West on this year’s red carpets — has become another way of cutting down on carbon emissions. Pattinson pointed to Emma Roberts’ vintage Armani Prive dress for the 2017 Academy Awards as an example. “Roberts’ gown was important because it showed that, as much as we must look at new ways of making things sustainable, we still have to have a conversation about how there is so much beauty in what’s already been made,” she said.

Timothée Chalamet’s Prada outfit at the 2020 Oscars was made using yarn made from regenerated nylon, created from materials such as ocean plastics, fishing nets and textile fiber waste. A vintage Cartier brooch finished the look. Credit: Amy Sussman/Getty Images

Similarly, Eco-Age began its #30wears campaign, which invites shoppers to ask themselves whether they’ll wear a piece of clothing at least 30 times, encouraging them to consider a garment’s lifecycle and promoting a slower approach to fashion.
The consultancy has also challenged its own red carpet event — the annual Green Fashion Awards, which honors fashion players committed to change in the sector’s production chain — to find other ways to reduce waste. These have included the use of recycled fishing nets for its red carpet, potted flowers that can be later donated or reused, and recycled film sets for its backdrops.

“Raising awareness works,” Vocking said. “But for positive impact to be real, every single step of the chain has to be taken into consideration.”

Update: A quote in this story was amended after publication for clarity.