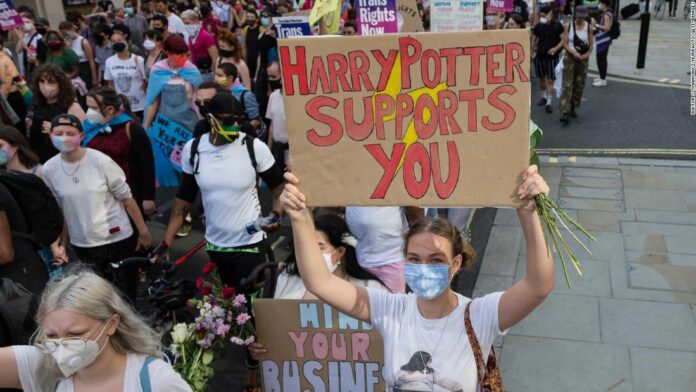 So when it emerged last week that JK Rowling’s latest book, written under her Robert Galbraith pseudonym, features a cross-dressing serial killer, “it was just another eye roll,” author and visiting Yale University gender studies professor Susan Stryker told CNN.
“As a historian, I’ve just seen this for so long, and it’s such a longstanding trope,” Stryker said. “It’s like a trans person is someone who is deeply deranged and is a danger to other people and kills people out of their own sense of being psychotically flawed.”
Pop culture has featured violent representations of transgender people for decades, in pulp novels, occult paperbacks, horror movies and television drama.
Yet research indicates that transgender people are far more likely to be victims of violence than the rest of society.
The European Union Agency for Fundamental Rights 2020 survey found that one in five trans and intersex people had been physically or sexually attacked in the previous five years — double the rate for other LGBTQ groups.
Trans people (28%) in England and Wales were victims of crime in the year to March 2020 at twice the rate of cisgender people (14%), according to the Office for National Statistics.
The Trans Murder Monitoring project reported 331 murders of trans and gender-diverse people globally in the year to September 30, 2019, a figure likely to be a conservative estimate, according to the United Nations Development Program (UNDP).
And it’s getting worse. Brazilian advocacy group ANTRA reported 49% more murders of transgender people in Brazil in the first four months of 2020 than during the same period in 2019. In the US, the number of suspected murders of trans people in 2020 has already surpassed the total for 2019, according to the National Center of Transgender Equality.
There could be several reasons for this. The Covid-19 pandemic has heightened isolation, financial strain and other forms of stress. Transgender people face greater risks of being forced into unemployment, poverty, homelessness or sex work, making them more vulnerable to violence.
They are also more at risk of partner violence — which appears to be rising in many locations during the pandemic — according to LGBTQ advocacy group the Humans Rights Campaign. And governments from Hungary to the US have been chipping away at anti-discrimination protections for trans people in social and health care settings.
Data on violence against trans people is rarely collected by national authorities, according to UNDP. In Africa, Asia and the Pacific, it’s particularly sparse.
UNDP’s Asia Pacific report attributed this to high levels of stigma and laws against being trans. It cited a 2011 Fijian community study that found 40% of trans women had been raped; a 2006-07 Bangladeshi survey that found 28% of intersex and trans women reported being raped or beaten the previous year; and 2008 research in which 89% of trans women in Pattaya, Thailand reported experiencing violence.

Stryker traces misconceptions about trans people back to late 19th and early 20th sexological scholars who pathologized transness as an extreme form of “gender inversion” believed to cause same-sex attraction.
“I think once you have that framework in place, then it’s easy to see the trans person as a dangerously psychotic person,” said Stryker.
Many of the transgender characters we grew up reading about or watching reflect this fear.
“Psycho” (1960) was one of the earliest horror movies to link gender fluidity with a desire to kill, as murderer Norman Bates dresses up as his mother. In the 1988 novel and 1991 movie “Silence of the Lambs,” Buffalo Bill kills women in order to make a suit out of their skin.
The “cross-dressing killer” also appears in movies including “Texas Chainsaw Massacre” (1974) and “Dressed To Kill” (1980). The first “CSI” serial killer was a transgender man who murders his mother, while “Nip/Tuck” season 2 featured a storyline about a baby-stealing trans woman who sexually abused her son.
Alex Schmider, associate director of Transgender Representation at LGBTQ media monitoring organization GLAAD, told CNN that the “conflation between gender nonconformity and this serial killer trope” was part of the reason “people so misunderstand who trans people actually are.”
“Media is such an informant of culture and public understanding. And these representations that we see on screen do not just live on screen, they affect people’s lives … we’ve seen that in a lot of the policy and legislation that’s been introduced over the past few years, in narratives about trans people.”
And while some insist that many of these characters are mentally unstable cross-dressers rather than transgender, British Vogue contributing editor Paris Lees told CNN that argument is irrelevant.
“We know that people conflate this, they don’t make the distinction,” she said. “There is a very determined, concerted campaign to justify discrimination against trans people specifically using these manufactured fears.”
“I can’t sleep at night knowing that kids are feeling how I felt when I was growing up. And [Rowling’s book] is part of a much wider problem of transphobia and anti-trans prejudice that we’ve got in the UK where basically trans people are being scapegoated,” she said. “It’s sick.”
Rowling is one of several prominent figures who have stoked debate over issues such as gender self-declaration and use of bathrooms, which activists say encourages discrimination. The “Harry Potter” author has been labeled a trans-exclusionary radical feminist (TERF), a term that many consider a slur, for insisting there is no deviating from one’s assigned sex.
In June, Rowling published an essay about gender identity on her website, explaining how her own experiences influenced her views, and disclosing that she is a domestic abuse and sexual assault survivor. “All I’m asking — all I want — is for similar empathy, similar understanding, to be extended to the many millions of women whose sole crime is wanting their concerns to be heard without receiving threats and abuse,” she said.
A representative for Rowling declined to comment to CNN.
Lees says that even as one of the most privileged trans women in the UK, she wants to leave the country. “It’s not a safe place for trans people,” she said.
“I’ve experienced violence. I’ve experienced sexual harassment … you want to drag out this old trope of ‘man puts on a dress and goes around killing women.’ It’s unkind, it’s unfair and it’s unrealistic. I just don’t understand why we are focusing on the imagined threat that trans people present rather than the very real documented violence that we know trans people face.
“The media is absolutely refusing to talk about the fact that we face horrific violence as a community, and that we are being pushed in many cases to suicide.”
The 2015 US Transgender Survey found that 40% of survey respondents had attempted suicide in their lifetime, which it said was nearly nine times the attempted suicide rate in the wider US population (4.6%).

Beyond villains and victims

Violent portrayals aren’t the only problem with how transgender people are shown on screen.
GLAAD’s analysis of transgender characters on US TV from 2002-12 found that when not cast as predators, trans characters often faced brutal attacks.
More than half of the tracked episodes were rated negative/defamatory, 35% good to problematic, and just 12% outstanding, according to GLAAD.
The most common profession for fictional transgender characters was sex worker; a fifth worked in the sex industry. Anti-transgender slurs and dialogue featured in many episodes and storylines, the study found.
Numerous films and TV shows in recent decades — from “The Cleveland Show” to “Ace Ventura: Pet Detective” — feature cisgender straight men vomiting repeatedly after learning they had touched a trans woman.
But transgender representations in pop culture are gradually expanding beyond negative themes.
The 2002-12 GLAAD report found that trans characters were killers or villains in at least 21% of episodes and storylines, and “victims” in at least 40%. This dropped to 10% villains and 15% victims in 2012-13. And in 2013-14, only one trans victim and no transgender villains were recorded.
Laverne Cox’s standout performance in “Orange is the New Black” in 2013 paved the way for a broader range of transgender characters, from “Transparent” to “Billions” to “Grey’s Anatomy.”
Yet of 488 regular and recurring LGBTQ characters in 2019-20, just 38 (8%) are transgender. That’s up from 26 the previous year — but two series, “Pose” and “The L Word: Generation Q,” account for more than a quarter of those roles. Cisgender actors play seven of the 38 parts.
Schmider says that when cisgender actors play trans characters, “that can often reinforce the misguided notion that being transgender is a costume, it’s dress up, it’s performance, when in fact, transgender people are living full, authentic lives.”
In the “Disclosure” documentary — which looks at the depiction of transgender people in movies and television — actor Jen Richards says: “Having cis men play trans women, in my mind there’s a direct link to violence against trans women.”
For the third year in a row, GLAAD’s Studio Responsibility Index reported no transgender characters in a major movie.

Schmider says that culture is still “countering 100 years of misrepresentation and inaccurate stereotypes” of trans people.
“We’re still in a place of getting beyond transition narratives, getting beyond focusing on the trauma and the tragedy of trans people’s lives … the hope is to have more nuanced and complex portrayals,” he said.
V Varun Chaudhry, assistant professor of Women’s, Gender, and Sexuality Studies at Brandeis University in Massachusetts, told CNN he believes changes in the past few years are driven by trans people working in writing and production.
“We’ve seen a really beautiful explosion of trans sensibility, one that’s been really diverse, and bred in large part by the work of Black trans folks like Janet Mock [writer, director and producer of ‘Pose’],” he said.
Ryan Murphy’s “9-1-1: Lone Star” made history this season by casting Brian Michael Smith as broadcast TV’s first Black transgender male actor and character to be a series regular.
But Chaudhry says we still need “more diverse people who are behind the scenes.”
White men still dominate Hollywood, Broadway and publishing, he said. “When that’s the case, it’s always going to trickle down into representation that’s limited. So I think there needs to be real concerted effort at every single level to include people in the conversation and to expose the normative conventions that we have.”
However, the experts warn that greater visibility can also put trans people at risk. Stryker says vulnerable individuals may become targets for “unresolved aggression, anger, hostility, confusion.”
Visibility “is both necessary for changing people’s opinions” and a potential problem, she says. “Visibility can be a trap that actually accelerates violence against the most marginalized.”