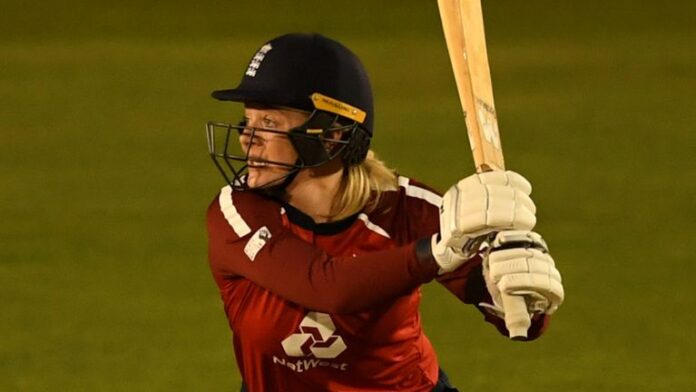 Knight’s team are 2-0 up and can clinch the five-match series with victory on Saturday and while the skipper admits the batting group are yet to find their best form, the bowling unit have been superb.

The spinners have proven particularly effective, taking a combined nine of England’s 14 wickets in the first two games to take the home side to two comfortable victories.

“Really encouraged,” Knight said of her spinners’ performances. “Sophie and Sarah have been consistently in the side for a long time now and really done well for us. And to see Mady take her opportunity like that after she didn’t bowl in the first game, really delighted for them.

“They’re obviously all 21 so it’s really nice to see them doing so well. What they have done is be really brave as well, Sarah Glenn got Deandra out the other day by tossing the ball up and if you don’t quite get that right then you know it is going to go the distance.

“So it is really pleasing to see them be brave in how they go about things and looking to take wickets, which is something we want to do as a side. Something we’ve addressed since the World Cup that we want to get better at is taking wickets, particularly through that middle period and those spinners are a massive part of that.”

England also benefit from the variety of their spinners, Ecclestone bowls left-arm spin, Glenn leg-breaks and Villiers is an off-spinner and Knight enjoys the possibilities it gives her as captain.

“It’s great to have,” she added. “We’ve got a lot of experience in our seam department and those spinners just give us a few different options so we can match up against different batters and in T20 that is very important to take wickets and control other team’s batters in different conditions.”

While the bowlers have excelled, Tammy Beaumont’s half-century in the opening match is the only time an England batter has reached 50 in the series, the next highest score is Glenn’s 26 in the second game.

“We probably haven’t played our best cricket yet but we’re still winning well, still scoring 150-plus despite probably not fulfilling our potential as a batting line-up yet,” Knight said.

“You’re always looking for big scores as batters and we haven’t had many people go on.

“The other night we had a lot of starts but no one went on to get that big score which we know wins a large percentage of games, so obviously you’re looking to do that.

“I think the West Indies probably bowled more to their plans and executed better other night; the pitch was a little bit slower so they went a little bit wider and went to that tactic which we probably didn’t adapt to well enough.

“I think me and Nat (Sciver), in particular, have had a really good year but we haven’t got the runs we’d have liked so far in this series. But Nat is hitting the ball better than ever in practice.”

With every match in the series available to watch free on the Sky Sports Cricket YouTube channel, Knight thinks it might the most visible bilateral series England Women have ever had and despite two comprehensive wins so far, the England skipper says how such a one-sided series may lead people to view the women’s game is not the concern of her team.

“Our job is to try and win games of cricket,” she said. “Obviously, the West Indies have had a little bit of a break and not many of them were training before they came over here so that has to be taken into account a little bit.

“The other day did threaten to be a really good game when Deandra (Dottin) and Stafanie (Taylor) were building that partnership, we did really feel under pressure. And in the first game as well, when Deandra was there you always felt they could make a game of it because you know the hitting potential she does have.

“But as a side, I think we’ve executed extremely well, especially with the ball and managed to keep them quiet. Hopefully we can continue to do that.

“From a captain’s point of view and in terms of the growth of the team, you want to see the girls put under pressure as much as possible but we’re doing our job very well and the moment and we want to continue to do that.

“We’re desperate to put a show on.”