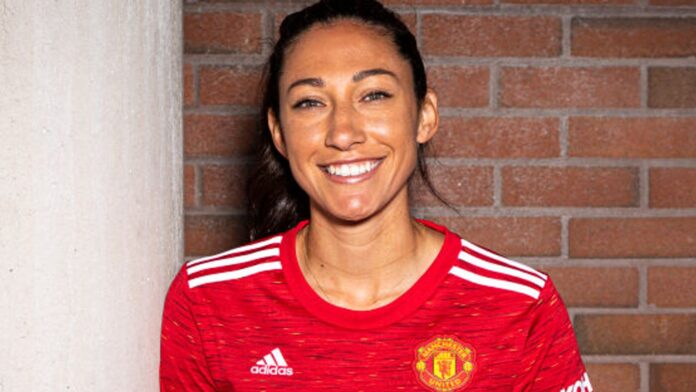 Forward one of a number of US internationals including Tobin Heath, Alex Morgan, Sam Mewis and Rose Lavelle to join WSL sides from America this summer

Manchester United new signing Christen Press insists the club are capable of winning trophies and end the dominance of their rivals this season.

United added the two-time World Cup winning forward the day before Transfer Deadline Day last month along with fellow USA international Tobin Heath as they look to break into the WSL top three in only their second season in the top division.

“Competing for titles, that’s what I’m here to do,” Press said.

“In England we have more opportunities to do that, as well as qualify for the Champions League, and at Manchester United it’s a great opportunity to compete for all of those. That’s a very special and motivating environment to be in.”

Press and Heath join fellow world champions Alex Morgan (Tottenham) and Sam Mewis and Rose Lavelle (Manchester City) in the WSL this season and she admits the league is the place to be this season.

“Some of the best players in the world are playing here, the league is getting more attention and investment and there’s great competition between clubs.

“Manchester United being such a young club is exciting. There’s a fresh hunger and vibrancy that comes from the club and the players and that’s great to be a part of. The team is prided on being disciplined, organised and being humble.

Press admits she hadn’t intended to move to Europe this summer but the coronavirus pandemic completely changed her plan.

The NWSL has been split into two short competitions since lockdown, allowing Press to take advantage of interest from abroad to stay match sharp ahead of next year’s Olympics.

“The whole year has been hard. It’s not a series of decisions that were taken lightly or planned. Looking forward there’s an amazing opportunity to be involved in a game environment for the next 10 months that, regardless of the state of the NWSL, will be going into an off-season.

“I was not planning to come over to play in Europe, not that I was against it, I just didn’t see it in the cards. But that did change and that was down to me being woken up by not being able to play. I had that feeling of I’ve got to get back and I’ve got to get back quickly.

“It’s been incredibly challenging to see the effects of the pandemic on the sport. It’s something we’ve, obviously, been dealing with in the United States and its prevented me from playing for a long time.”

“It wasn’t until pretty recently I knew there was legitimate interest from Man Utd and in my mind it was a very quick decision to sign here and play.”

This summer has seen clubs invest in WSL transfers more than ever. Chelsea broke the world transfer record to bring in Pernille Harder, while Manchester City brought in England internationals Lucy Bronze, Alex Greenwood and Chloe Kelly as well as Mewis and Lavelle.

The ambition for Press is to break City, Chelsea and Arsenal’s dominance at the top of the table, as well as add to her own impressive medal collection.

“Some of the best players in the world are playing here, the league is getting more attention and investment and there’s great competition between clubs. Manchester United gave me the right combination of it being challenging, it will be hard but also it’ll be fun and will be possible to win and come home with some hardware.”