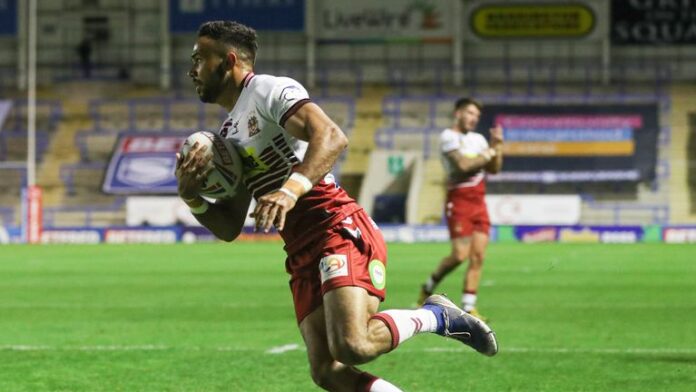 Wakefield threatened to spring an upset when they led 12-0 after 16 minutes but man of the match French came to the Warriors’ rescue with a try in each half to take his remarkable tally to 12 for the season and to 18 in 22 appearances for the club.

The defeat sends Wakefield back to the foot of the table but coach Chris Chester, so scathing of his side following their 29-6 defeat by Huddersfield a week ago, will be delighted by their spirited performance.

Chester was down to his last 17 players after losing a host through injury and coronavirus protocols, including David Fifita, but they were boosted by the return of exciting winger Tom Johnstone while skipper Jacob Miller was hugely influential on his return to the side.

The Australian stand-off was a constant thorn in the Wigan side and scored the opening try after a sustained spell of pressure on their line.

The Yorkshiremen were good value for their 6-0 lead and it got even better when makeshift hooker Jordan Crowther got forward Tinirau Arona over for a second try, with Tony Gigot kicking his second conversion.

Wigan, who suffered a shock defeat by bottom of the table Hull KR earlier in the month, played in fits and starts and hit a purple patch in the second quarter to haul themselves level with two tries in seven minutes.

Winger Joe Burgess was denied a try by a forward pass from second rower Liam Farrell, who was more accurate to get half-back Jackson Hastings over shortly afterwards.

Burgess was then involved in the next try, giving a return pass to French which enabled the Australian to glide over for his first try.

Zak Hardaker converted both tries to make it 12-12 but, as Wakefield continued to press, Miller was held up over the line and Gigot was wide with a drop-goal attempt on the stroke of half-time.

Johnstone was kept relatively quiet in the first half but he showed his danger early in the second half when palming the ball back from Gigot’s towering kick into the arms of his centre Bill Tupou, who was held just short of the line.

Johnstone was then denied a try by a last-ditch tackle from Wigan winger Jake Bibby and the misses began to look costly when hooker Sam Powell burrowed his way over from dummy half for the Warriors’ third try on the hour.

That put Wigan in front for the first time and Hardaker’s third goal made it 18-12 but the turning point came four minutes later.

Johnstone was once more the first to the kick, this time from Miller, but referee James Child ruled out the try for a knock-on and Wigan immediately took play up the other end where centre Oliver Gildart forced his way over for their fourth try.

Two minutes later, French wrong-footed the Trinity defence for his second try and Hardaker kicked his fourth goal to stretch his side’s lead to 28-12.

But Wakefield were still not finished. Full-back Alex Walker had a try disallowed before Johnstone gained his reward five minutes from the end with a deserved try and he also pulled off a tremendous tackle at the other end to deny Farrell.