Home Sport Hamilton makes his move ahead of qualifying 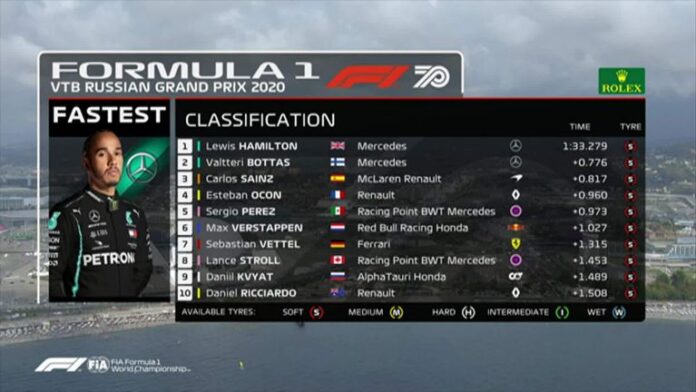 Lewis Hamilton hit the top of the timesheet for the first time on a potentially-historic weekend for F1’s world champion in final practice at the Russian Grand Prix.

Hamilton was comfortably faster than Valtteri Bottas, Friday’s pacesetter, on this occasion with a lap of 1:33.279 which was a massive eight tenths of a second faster than his Mercedes team-mate.

But the battle between the pair is likely to be rather closer when pole position is on the line in qualifying from 1pm live on Sky Sports F1 – while the fight for the grid places behind appears hugely competitive.

In P3, McLaren and Renault maintained their fine form from the opening day with Carlos Sainz and Esteban Ocon third and fourth for the two teams respectively.

With Sergio Perez close behind in fifth for Racing Point, that meant Max Verstappen was only sixth quickest but the Dutchman had shown Mercedes-challenging pace earlier in the session on the soft tyres.

Verstappen did not, however, hook up a final qualifying simulation and therefore lost ground to the top two in the final stages.

Team-mate Alex Albon had his best lap time deleted for exceeding track limits and finished down in 19th. Lando Norris was 20th and last after not clocking a qualifying simulation either.

Sebastian Vettel finished seventh for Ferrari amid an improved showing for the four-time champion relative to his team-mate Charles Leclerc so far this weekend. Lance Stroll (Racing Point), Daniil Kvyat (AlphaTauri) and Renault’s Daniel Ricciardo rounded out the top 10.

Ricciardo was the fastest driver of all in the first sector of the Sochi lap but his final attempt was compromised by a wing-mirror issue on his car. However, the Australian has run strongly throughout practice and appears a certain top-five contender for Q3.

On a warm morning on the banks of the Black Sea, several drivers again ran off the circuit fighting for grip.

Romain Grosjean was notably vocal over the radio about his unhappiness with the handling of his Haas car and, to compound his session, the Frenchman spun off in the closing stages.