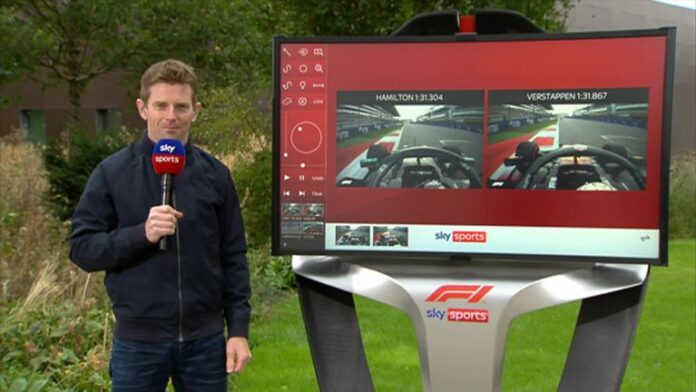 How did Hamilton go from the brink of a shock Q2 exit to a dominant pole position? Lewis explains his Saturday Sochi dramas; Watch Sunday’s race from 12.10pm on Sky Sports F1

Lewis Hamilton used the words “horrible” and “stressful” to describe his rollercoaster Saturday at the Russian GP after he snatched a superlative pole position from the jaws of a qualifying “mess”.

The final timesheet in Sochi showed Hamilton claimed his fifth pole in a row by more than half a second from Red Bull’s Max Verstappen and Mercedes team-mate Valtteri Bottas.

But was it textbook? Not a chance.

That large final Q3 advantage belied the dramatic story of a qualifying hour in which Hamilton at one point had been one second away from being knocked out in Q2 and starting the race towards the back of the field.

“It was one of the worst qualifying sessions – it was horrible!” admitted F1’s six-time champion.

“Heart in your mouth the whole way.”

He later told Sky Sports F1: “It was difficult and we definitely didn’t agree a lot [among the team] within the session. It was just a mess.

“It starts off for me going wide at the last corner [in Q2] and just started off a domino effect of issues, I would say.”

Hamilton’s qualy comes back from the brink

Q2 could barely have been messier – or more fraught – for Hamilton and Mercedes.

Having already taken two runs to get a qualifying time on the board in Q1 – after initially running wide at Turn Two in an incident that was investigated by stewards after qualifying – Hamilton found himself without a time when Sebastian Vettel’s crash brought out the red flags with just over two minutes of the second session to go.

The Mercedes driver had seen his first Q2 effort deleted by race control for running too wide at the final corner.

“I got the time taken away, which is the first time I’ve gone wide there the whole weekend,” recounted Hamilton.

“I wanted to stay out and do another lap just to get a banker but they said ‘come in, get new tyres’ and then the red flag came out. It was a real risk once we got out on that next tyre at the end.”

Despite wanting to continue on the medium compound he had originally started Q2 on, Hamilton was switched to the faster soft tyre for his final attempt – ensuring he would be out of sync with the medium-shod Bottas and Verstappen for Sunday’s race start were he to make Q3.

He explained: “At the end of Q2 I wanted to go back out on the medium, because of course I don’t want to start on the soft tyre but we had to wait at the end of the pit lane for two minutes and we had… the tyre temperatures would have dropped down massively, already just on that brand new tyre, on the soft.

“I had a big slide into turn one so it definitely wasn’t great and I did plead to have the medium tyre but they weren’t having it.”

But the more immediate concern was simply making sure he had a chance to fight for a starting position at the head of the field.

Near the back of the queue as the cars eventually retook to the circuit for Q2’s closing two minutes, even Hamilton’s usually ice-cool race engineer, Peter Bonnington, appeared to be showing the strain as the clock ticked down to the chequered flag.

Hamilton crossed the line to start his final attempt in time – but with barely a second to spare.

“I nearly spun at Turn One because the tyre temperatures were so low,” said Hamilton of his out lap after he again ran wide at the circuit’s first real corner.

“I think I overtook one car going into the second to last corner or two cars I think it was, but then I got blocked by the Renault, and I was dead slow in the middle of the last corner about to start the lap and I could just hear Bonno saying “Go, go, go, go, go, go!”.

“So I was just gunning to try to get across the line, so very, very fortunate. I don’t think that was just luck, I think it was just the right timing for us.”

Hamilton shows his class in Q3

But yet after an unusually tense build-up to the final phase, Hamilton rediscovered his usual serenity for Q3 and the pole shootout just when it mattered most.

Recalling the moments before Q3, Hamilton said: “Just having to calm myself down and find my centre, you know, calm my heart down and wanting to deliver in Q3.

“I was adamant. I had no choice. I had to deliver on those two laps.

“Valtteri had been doing great all weekend. Nothing new in that respect but I knew I needed to have a perfect lap, particularly on the first run to get the pole.”