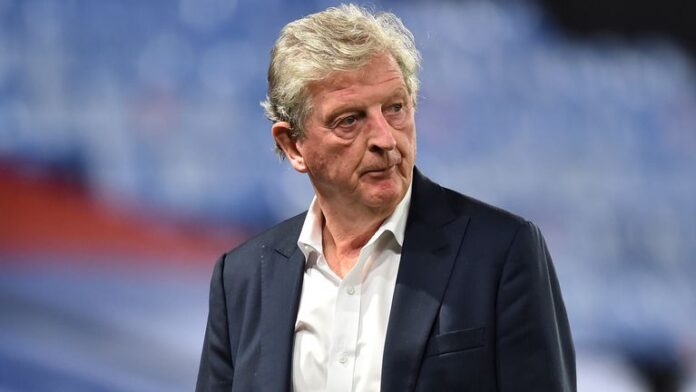 Roy Hodgson has branded the rules on handball as “nonsense” after Crystal Palace suffered their first defeat of the Premier League season to Everton.

Just before the end of the first half, Joel Ward was penalised by a VAR check for handball after a downward header from Lucas Digne hit his wrist that was away from his body. The Crystal Palace defender had already survived a similar handball check earlier in the game.

According to the International Football Association Board, if the ball hits the hand of a player who has made their body “unnaturally bigger” then a foul will be awarded.

But it is a rule that has left Hodgson disappointed, calling it “nonsense”.

He said: “I just don’t understand how we’ve allowed it [the handball] to happen. The Premier League, the referee, the coaches, the managers, the players, I don’t know how we’ve allowed this type of situation, which we have at virtually every match at the moment, to occur because the rules of football are important.

“Now we have to take on board rules which are being suggested, but are they the right ones to judge handball? For me, they aren’t so I think the whole thing is a nonsense.

“I’m always disappointed when a good game of football between two good teams, which probably should have finished as a fairly evenly contested draw, now means that one team goes away with three points and the other with zero. Of course, the winner leaves knowing full well it shouldn’t have been a penalty and the loser goes away thinking ‘we played well enough but this sort of penalty has robbed us of any points in the game’.

“I just find it very disappointing that the game I love and believe in is being reduced to this level where every week, games are being decided on so-called penalty decisions for handball which aren’t handball.

“Unfortunately, instead of the quality of football today between the two teams, which I thought was actually very good and probably worthy of two teams who have started the season so well, all of the discussion is going to be about handball or not.

“I will probably find myself in the spotlight for an obvious truth. The rule is wrong and I don’t understand how we in football have allowed it to happen.”

It was a feeling echoed by opposing manager Carlo Ancelotti, who said: “We can agree or not with the rules [on handball], I know I cannot be agreed with this kind of rule but at the end, it is a really difficult decision. There is a new rule and you have to accept that first of all.”

Everton have won all three of their Premier League games but unlike their 5-2 demolition of West Brom last weekend, faced a sterner test at Selhurst Park.

Ancelotti said: “The performance was difficult… The first half was quite good, we were able to play as we want but it became more difficult when Crystal Palace played a good second half, putting a lot of pressure on us.

“If I have to judge the period, I think we’ve done really well. We have a new squad with new players, they adapted really well. The start of this season was fantastic but I think we have to keep going to think to the next game, to try to improve and be focused there. I’m really pleased what we did in this first period of the season.”

There was also another goal for Dominic Calvert-Lewin, who has scored in every league game this season and took his tally to five on Saturday.

Asked about a potential England call-up for Calvert-Lewin, Ancelotti added: “The only way to reach the dream and play for the national team is to behave like he is behaving in this moment. That’s it and for sure, the staff of the national team are going to have a look to him without doubt.”