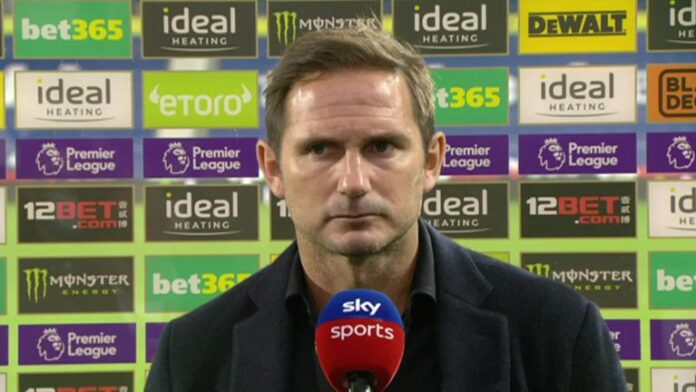 Frank Lampard: “I can laud character, because we showed character in persistence, but we didn’t need to if we’d done things properly in the game.” – Slaven Bilic: “It’s unbelievable… to have two points taken from us in this manor with VAR is completely beyond me.”

Frank Lampard rued more Chelsea mistakes in defence as their late comeback in the 3-3 draw with West Brom covered up a woeful first-half.

Chelsea found themselves 3-0 down at half-time following three defensive errors, but fought back in the second half, equalising in the 93rd minute through Tammy Abraham.

Lampard clearly felt it was a case of two points dropped, with Chelsea registering 22 shots on goal, but says no matter how much his side create, mistakes will always cost them.

Lampard told Sky Sports: “It is two points lost in the end – and that’s no disrespect to West Brom. To come here and you know the transition and any mistakes would be something they would jump on to counter attack against us – that and set pieces. We spoke before the game, you can’t legislate for the mistakes that there were today. it gives you a difficult game to come back in.

“I can laud character, because we showed character in persistence, but we didn’t need to if we’d done things properly in the game.

“The first one is a mistake, Marcos heads it into the middle of a pitch. The Thiago one is a mistake, he’s been in the game long enough to know that, and we’ll certainly give him that one in his first game. And then Marcos loses his man for the third goal from the corner.

“It was mistakes, clear mistakes. You can have as many meetings as you want but with those mistakes you give yourself a mountain to climb.

“We created two or three great chances in the first half. I felt we would create more, the only other problem at 3-0 was West Brom were going to protect their lead more. It is a big lesson for us, a big lesson in the detail of the game, it doesn’t matter how much you create, but we will get a lot better, we’re still finding our way with new players and a lack of pre-season. Today is part of the process of getting better.

“There is a lot we can keep getting better at. I’m not going to criticise every part of our game, I think they had three shots on target and got three goals. There were genuine mistakes. There was nothing tactically you can analyse again and again – there were just pure mistakes.”

West Brom manager Slaven Bilic, recently banned from the touchline for the Carabao Cup clash with Brentford in midweek after being sent off for remonstrating with Mike Dean in the defeat by Everton last weekend, was again disappointed with the officials on Saturday.

The ball hit Kai Havertz’s hand in the build-up to Chelsea’s equaliser at the Hawthorns, but because Havertz’s touch did not immediately lead to the goal, it was not ruled out.

Speaking to Sky Sports, Bilic said the call was unbelievable.

“It’s not that it looks like [a handball] or that it might be a handball, but what do you want me to do now? To say what I want to say and they fine me again? It’s unbelievable. You have a bunch of guys there who did everything to win the game, who defended great and to have two points taken from us in this manor with VAR is completely beyond me.

“I told the guys before the game this is a game of character, a game of mentality. We can’t outclass them but we can out-run them. We can’t give them anything but must grab whatever they give you and create and score goals. It is a very good performance from us but at the same time we are extremely disappointed with the outcome. Before the game it is a good point for us but the way it happened in the dying seconds of the game – it’s unbelievable.

“I’ve seen a lot of positives, even against Leicester and against Everton in the first half. We have played against three teams that are really, really good who are contenders to be top-four, top-five. To have this performance is a big boost for us but we deserved three points today.”