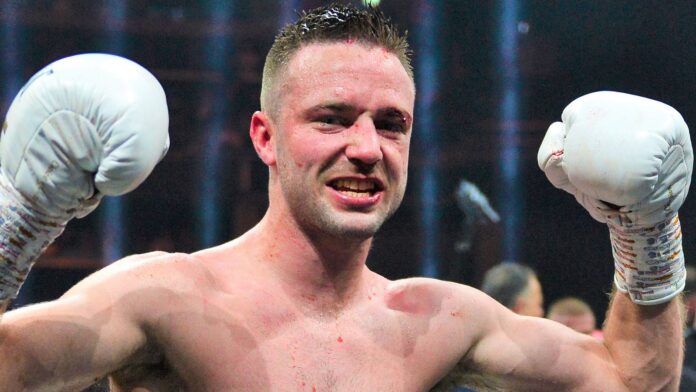 Josh Taylor further enhanced his reputation with a first-round knockout of Apinun Khongsong as he defended his WBA and IBF super-lightweight belts in style.

The Scot started on the front foot and caught the Thai challenger with a left-hand body shot to secure victory after two minutes and 41 seconds of action at York Hall in London.

The IBF mandatory challenger got off the canvas but then rolled out of the ring under the ropes and left the arena on a stretcher.

The contest – initially due to be staged in Glasgow in May – was Taylor’s first since winning the World Boxing Super Series against Regis Prograis 11 months ago.

Khongsong, 24, had only fought once outside of Thailand, in Japan, and had not fought anyone near the class of Taylor’s opponents, four of whom lost their unbeaten records against the Scot.

And he found the step up in level far too much to handle as Taylor quickly overcame a hurdle in his quest to become undisputed world champion by taking on WBO and WBC champion Jose Ramirez.

“I knew from watching him on videos, he swings on the break when you’re in close on the clinch, he swings straight away always with a hook and an uppercut,” Taylor told BT Sport.

“I sort of pressed in against him, smothered him up and pushed him against the ropes and as he threw the right hand, I hit him with a left hook which I felt sinking right in.

“I knew it was a real good shot. I didn’t know it hurt him to that extent until I turned round and saw him lying on the floor. When I watched him on the replay it sunk right in, I felt it going right through my arm so I knew it was a good shot.”

Despite the brief nature of the contest, Taylor felt his opponent was dangerous.

“I know people will say ‘aye, right, you’re talking a bit of nonsense here’, but I could go as far as saying that’s the heaviest puncher I have been in with,” he added.

“Very heavy-handed because he came out straight away with a stiff jab and I thought it was quite strong. And then I lunged in with the one-two and he kind of half nicked us on the end of the shot. It never hurt or nothing but I felt the weight of it.

“So that switched me on to take my time and set things up and be patient rather than go in and try and land a heavy shot straight away.”