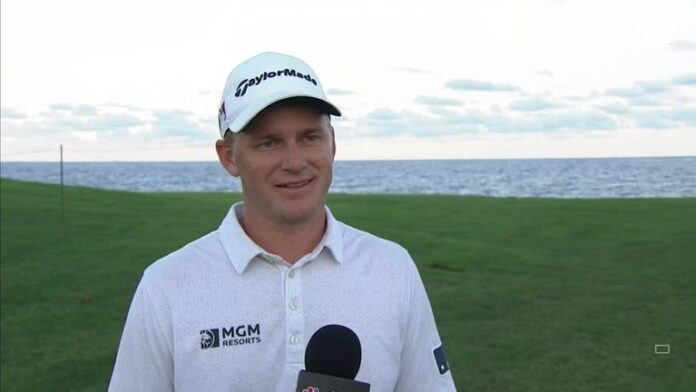 Watch the final round live on Sunday from 8pm on Sky Sports Golf.

Adam Long carded a bogey-free 64 to take a two-shot lead into the final round of the Corales Puntacana Resort and Club Championship.

The American posted eight birdies on a low-scoring day in the Dominican Republic to get to 17 under and move ahead of overnight leader Hudson Swafford.

Mackenzie Hughes is three strokes off the pace in third after two chip-ins over the last four holes helped him to a second successive 67, with China’s Xinjun Zhang a further shot back in fourth.

“It’s nice when those days are like that where you’re just kind of feeling the putter and you’re making putts,” said Long, who one-putted nine of his last 10 holes. “I wasn’t thinking about a whole lot of things, I was just trying to make everything.”

Long followed back-to-back birdies from the second by taking advantage of the par-five seventh and posting successive gains around the turn, before three straight birdies from the 12th to get to eight under.

The American got up and down from off the green to save par on each of his last three holes to close out a blemish-free card, with Swafford staying two behind after failing to find a birdie on his back-nine.

Swafford had cancelled out a bogey at the second by making a two-putt gain at the fourth, with a 20-foot eagle at the seventh and a long-range birdie at the next helping him to a three-under 67.

Hughes made his late charge up the leaderboard by holing from off the green to post birdies either side of the one he made at the 17th, while Zhang was also three back until a final-hole bogey dropped him to 13 under.

Nate Lashley shares fifth spot with Sean O’Hair after a bogey-free 65, while Anirban Lahiri is in the group six off the pace after matching Long’s joint-low round-of-the-day 64.

Who will win the Corales Puntacana Resort and Club Championship? Watch the final round live on Sunday from 8pm on Sky Sports Golf.