Home World ‘When Lewis is gone, who have you got to look up to?’... 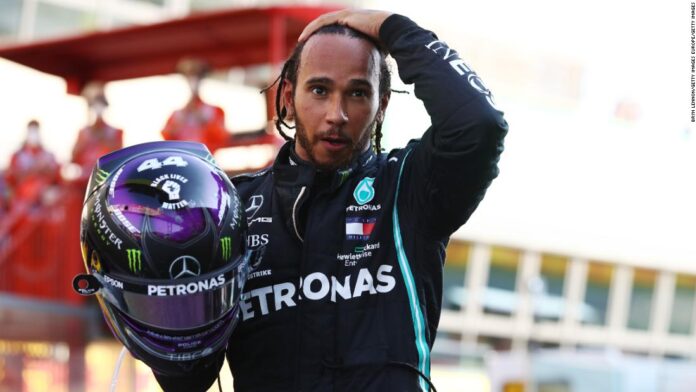 The 35-year-old has been using his platform as the world’s best Formula One driver and one of the most famous athletes on the planet to fight for racial equality and justice, in particular through his support for the Black Lives Matter movement.
Earlier this month, Hamilton stood atop the podium after victory at the Tuscan Grand Prix with the words “ARREST THE COPS WHO KILLED BREONNA TAYLOR” emblazoned on his shirt.
Hamilton is the first and only Black driver to have lined up on the F1 grid and has been the sport’s leading — and oftentimes only — voice as it reckons with its lack of inclusiveness.
Though Hamilton shows no signs of slowing down — he currently leads the driver standings by 55 points in the pursuit of a record-equaling seventh world title and could equal Michael Schumacher’s record of 91 grand prix wins at Sunday’s Russian GP — the Briton is arguably entering the twilight of his career.
Nicolas Hamilton, Lewis’ half-brother and a driver in the British Touring Car Championship, fears for the sport when he eventually retires.
READ: F1 champion Lewis Hamilton opens up about his loneliness and ‘difficult days’
READ: Lewis Hamilton, Formula One’s voice and conscience
“At the moment, you look at motorsport as an industry and it’s hard to get in touch with,” Nicolas tells CNN Sport. “You don’t know where to go to get an opportunity. You don’t see any Black faces there, or very few, and the one that you do at the moment is Lewis and he’s at the top of it.
“When he’s gone, you know, who have you got to look up to? Who are you going to see? There’s not many people, females as well, females love cars just as much as men do and so there’s no reason why they shouldn’t have equal opportunity in that sense as well.”

F1 says it “fully recognizes” that it “needs to be more inclusive and diverse.”
“While we set out our strategy last year to improve the position of our sport, we need, and want, to do more,” it told CNN in a statement. “That is why we will establish a Task Force to listen and ensure the right initiatives are identified to increase diversity in Formula 1.”
“We want to ensure we give people from all backgrounds the best chances to work in Formula 1 regardless of their gender, ethnicity, sexual orientation, or physical abilities.
“We are therefore also taking the initial step of creating a foundation to support key educational and employment opportunities across Formula 1 that will give under-represented talent the chance to work in this incredible sport and build an exciting career.”
Despite F1’s issues around diversity and inclusiveness, Nicolas still believes it has made some strides since Lewis first entered the sport more than a decade ago.
He recalls a test session in Barcelona in 2008 when a group of fans wore blackface, curly wigs and t-shirts with “Hamilton’s’ family” written on them, an incident that prompted the FIA, motorsport’s governing body, to launch the anti-racism campaign EveryRace.
The F1 star was faced with a similar incident at the Spanish Grand Prix the following year and Nicolas says it’s something they have always had to deal with as a family.
“We struggled as a Black family, we had a lot of racist abuse,” Nicolas says. “My parents, you know, did their best to make sure that I didn’t really understand what was going on, so it didn’t mean that I was able to really be outspoken and think: ‘Yeah, I really don’t think I have the opportunities that I believe I should have.’
“I went to an all white school and I was the only Black person there, but at the time, as a kid, I didn’t realize that that was a problem. In motorsport, there are very few people of color and when there are people of color, sometimes you see a lot of racial abuse.
“So at the time, yeah, motorsport wasn’t doing enough … but now it’s starting to, which is a good thing.”

Nicolas says Lewis has taught him a lot about race on the role they can play in helping to create change, something which has inspired him to become more outspoken.
“As the Hamilton family, we’re in a strong position to be able to [help] make change,” he says. “But it doesn’t matter whether we want to make that change, the governing bodies have to listen to us.”
Those changes, Nicolas believes, should not be limited to improving racial diversity.
The 28-year-old, who has cerebral palsy and drives a modified car in the BTCC, would like to see F1 made more accessible to those with disabilities.
“I would love to see people in wheelchairs being able to access the circuit, access race cars,” he says. “You know, whether they are a mechanic or they’re an engineer or an aerodynamicist.
“They might come from a different background, never been able to walk … that’s fine, but they can still continue to follow their dream of being a mechanic, or whatever it is, in an industry that was once difficult [for them] to get into. I would love to see that.”
Following George Floyd’s death at the hands of a police officer in May, Hamilton set up The Hamilton Commission to increase diversity in motorsport and called out F1’s “biggest stars” for “staying silent … in the midst of injustice.”
In the wake of Hamilton’s initiative, former F1 chief executive Bernie Ecclestone, who was in charge of the sport for nearly four decades, told CNN that “in lots of cases, Black people are more racist than what White people are.”
Those comments from the formerly most powerful man in F1 arguably demonstrate the challenges the sport faces.
“There is clearly a difference in opportunity if you are a person of color in comparison to a White person,” Nicolas says. “I’m not necessarily outspoken, I just try and keep myself to myself, but I know that there are a lot of changes that need to be made.
“Being the only Black person in my school to being a part of the only Black family within motorsport as an industry, you know, you sort of sit back and realize that’s wrong on all levels and that everybody should be able to have equal opportunity, regardless of color, creed or situation of their life and Lewis being able to use his platform to strengthen that for others is a great thing.”
Speaking to TIME after making the publication’s top 100 most influential people of 2020, Hamilton admits he was previously discouraged from speaking out and had to make a conscious effort to become the leading voice he is today.
“My dad would always say: ‘Do your talking on the track,'”said Hamilton. “So I suppressed these things and it brought up a lot and I was like I’ve got a niece and nephew and I’m like I want to utilize my time and my platform and my voice to change the future for them and for the other kids around the world.
“I should’ve done more, I thought me just being in the sport would’ve just shifted things but it hasn’t been enough and so I’m making sure that I correct that or at least apply my efforts and time.”