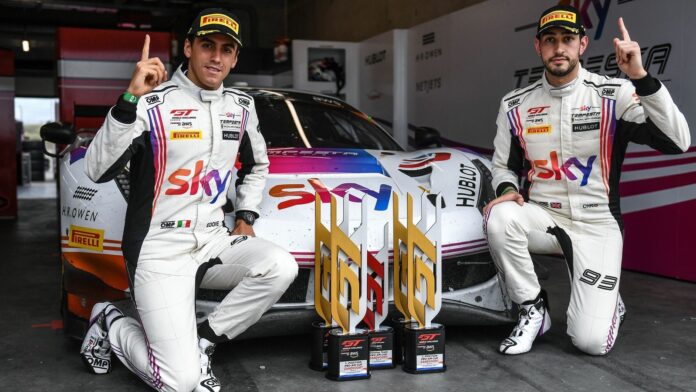 Another double win for the British team, this time at Zandvoort; Watch highlights of the latest round of GT World Challenge Europe on Sunday at 3pm on Sky F1

Sky Tempesta Racing maintained their twin championship push in the GT World Challenge Europe by winning both Pro-Am races at Zandvoort on Saturday.

Chris Froggatt and team-mate Eddie Cheever claimed victories in the two sprint races at the Dutch circuit, results which extended their leads in the drivers’ and teams’ standings for the class.

“Consistent driving, super happy. Great race for both of us and we have a good position in the championship.”

Cheever added: “I’m very happy with the first stint and Chris did an amazing second stint. He took the lead, so a very good job and very good for the team.”

Highlights of the two Zandvoort sprint races air at 3pm on Sunday on Sky Sports F1, straight after live coverage of the Russian Grand Prix. The programme airs again on Monday at 10pm.

In their second season of the former Blancpain series, the Sky Tempesta outfit have now won six times this season – with four for the Froggatt-Cheever combination in the #93 car – and lead fellow Ferrari runners AF Corse in both the overall and sprint cup standings.

Froggatt and Cheever also lead in the Pro-Am Cup for drivers.

Froggatt on learning from Fisi & his 2020 development

A second car entered for the previous sprint event at Magny-Cours had seen three-time F1 race winner and GT veteran Giancarlo Fisichella return to the team’s line-up – and successfully so.

The Italian claimed his own double win for the team alongside Jonathan Hui, with Froggatt and Cheever completing one-twos in both races.

Fisichella, now 47, has continued to race extensively in sportscars since ending his 229-race F1 career just over a decade ago and first drove with the British-based team in last year’s 24 Hours of Spa.

For Froggatt, in just his fourth year of car racing, the chance to watch and learn from the Italian racing veteran was invaluable, as he explained recently to Sky Sports.

“It was super cool to race with Giancarlo at a circuit where he has done 12 grands prix,” said the Briton.

“For me it’s such a unique opportunity to be able to learn from someone like that.

“Not just experience on that track [Magny-Cours] but experience with this car and operating at such a high level for the last eight years or so that he’s competing with GT cars.

“He’s just got an immense knowledge. But what’s even more impressive is the knowledge of the way the tyres behave and the ways to drive the car for the first five laps in an hour stint, for instance. He has done so many race stints, so many stints in this car on that tyre, he’s got the knowledge and experience.”

“I’m a relatively new driver and while I’ve never really struggled with fast corners and the higher-speed sections of tracks, having his reference throughout the weekend focused me to look at more technical stuff on a track.”

With Sky Tempesta Racing’s GT World Challenge programme including both the sprint and endurance events this year, Froggatt has been pleased with his own development as a driver – particularly race management.

“I’ve never struggled really with one-lap pace, it’s been consistency while the fuel load in the car is changing, whilst tyres are getting older and the car is getting lighter,” he explained.

“So there are sweet points when you have maximum pace, but without experience when you wouldn’t know when that is. You’d think the start of a stint with new tyres would be quite good, but the car is quite heavy with about 90 kilos of fuel in, so it that’s which I think I have learnt the most.

“Doing countless race starts now and doing stints over and over again. I definitely see a big improvement this year from last. Measuring myself against Eddie as well, he’s a good benchmark and a very talented driver.”

The GT World Challenge Europe continues with the final event of the Sprint Cup series at Barcelona’s Circuit de Catalunya on October 10-11. The season then carries on with the prestigious 24 Hours of Spa at the end of October.