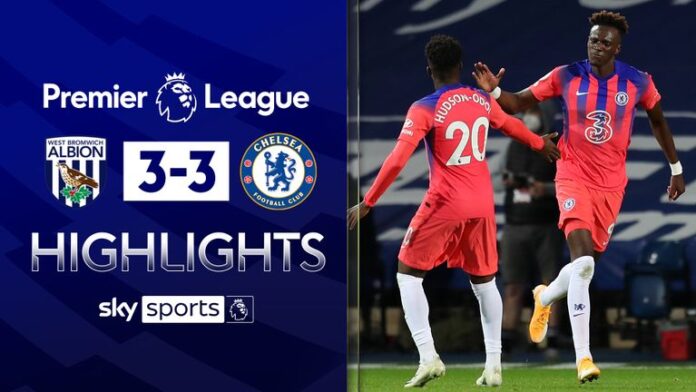 Chelsea produced a dramatic comeback to draw 3-3 at West Brom. Adam Bate was at the Hawthorns to see it but was left wondering how Frank Lampard is going to address the defensive problems that left Chelsea three goals down in the first place…

As The Liquidator blared out at the Hawthorns, Chelsea’s players should have been feeling right at home. Instead, it was their familiar away-day failings that were on display as they fell three goals down to West Brom on Saturday evening. Frank Lampard’s problems at the back show no signs of abating and threaten to undermine Chelsea’s hopes of progress.

That they managed to rescue a point with a dramatic second-half comeback culminating in Tammy Abraham’s stoppage-time equaliser will hearten many. The talk of team spirit and a group of players willing to fight for the cause is valid. The fact that all three goals were scored by academy graduates highlights the squad depth and might resonate with some.

But this was still only a point against newly-promoted West Brom. It was the home team who were on the deck at the end bemoaning two points dropped. That was because Chelsea had been cut apart in the first half, their hopes of victory already all but extinguished. The Baggies had done their homework. The book had not proven a particularly tricky read.

Kepa Arrizabalaga might not have been on the pitch – dropped, with Edouard Mendy certain to take up his position next weekend. But it was clear from this performance that the problems at Chelsea stem from what is happening ahead of the goalposts and not just because of the identity of the poor unfortunate soul expected to stand between them.

Willy Caballero let in all three of the shots that he faced. Never a good look. But his defenders did not make his job easy. The opening goal came from Marcos Alonso’s poor headed clearance, the second as a result of a woeful touch by Thiago Silva, the veteran Brazil international who had been handed the Chelsea captaincy on his Premier League debut.

This is the man supposed to solidify this defence. Instead, he gave Callum Robinson a clear path through it. Two down, just like that. A defence that folded following the slightest hint of some pressing. A back line scared into a stupor by the mere whisper of the word pace.

Silva has the experience not to repeat the sort of error that West Brom gobbled up so gratefully. But on this evidence, even at his best, the job requirement is not for a wise old head but somebody at the back who can run. Even at the age of 36, the Brazilian looks quicker than the Chelsea defenders who were either side of him at the Hawthorns.

Andreas Christensen might have more than a decade on his senior partner at the back but he does not have a yard on him. As for Alonso, who turned in a desperately poor performance, the weaknesses in his game have long been apparent to Chelsea supporters. Here, he was exposed time and again by the purposeful running of Matheus Pereira.

At one point late in the first half, Pereira dashed in between Alonso and Mateo Kovacic while the pair were briefly left staring at each other in disbelief. Darnell Furlong also had a run at the left-back once it become a free-for-all. The weak link had been identified. It was no surprise that Lampard did not allow Alonso to reappear for the second half.

The fear is that the personnel are only part of the problem at Chelsea. The system leaves them vulnerable. Alonso’s starting position was so high that he was almost operating as a wing-back in a back four. Pereira was happy to gamble by not tracking him, content that he could do far more damage in the final third than Alonso could ever hope to do at the other end.

James was leaving similar spaces on the other flank and it is tempting to think that had West Brom had the confidence to continue attacking after the interval, especially when Lampard went for broke by introducing Olivier Giroud for Thiago Silva, then the home side might have scored the fourth goal that would surely have ended any comeback aspirations.

Having already lost their first two matches of the Premier League season, Slaven Bilic’s side did not have the belief to see it through. Other sides will. And even if they do not, they will still fancy their chances of keeping things tight and exploiting another familiar weakness. West Brom’s third goal came from a corner, a flaw in Lampard’s side that has not been addressed.

The statistics have been well publicised. Chelsea have now conceded 11 Premier League goals from corners since Lampard took over. That is more than any team still in the competition – and this despite the fact that his team have actually faced fewer corners than every team to play in the Premier League both seasons in that time bar Manchester City.

Chelsea are conceding a goal from every 14 corners they face. It is a weakness and a sign of a weak team – one that has conceded more goals away from home than any other team in the Premier League since Lampard was appointed. It is a damning record and it needs to change but are any of the big-name summer signings really going to be able to do that?

Lampard was right to talk of attacking patterns taking time to establish. Timo Werner, still searching for his first goal after three Premier League appearances, can only improve. The firepower is there at Chelsea and Christian Pulisic’s return will only add to it. That can cover up a myriad of sins but Premier League success requires something closer to flawlessness.

Lampard knows that but does he know how to solve it? Antonio Rudiger was arguably Chelsea’s best defender but finds himself out of the squad and seemingly set to leave the club. Christensen and Thiago Silva do not appear to complement each other. It is a big ask to expect new arrival Ben Chilwell to cover these defensive deficiencies from left-back.

This is a team with lots of work left to do but little time in which to do it. Next week brings two more London derbies against Tottenham and Crystal Palace. Money has brought options and expectation. Only Lampard can find the solutions. He will understand that he needs to do so quickly or risk his own Chelsea rebuild project facing liquidation.