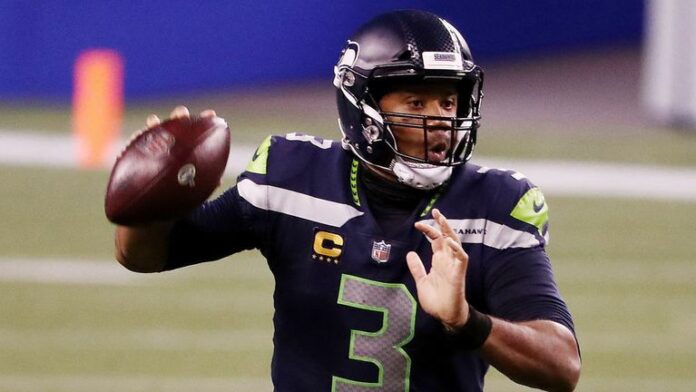 Watch Wilson’s Seahawks take on the Cowboys – as part of the Sunday night NFL triple-header – live on Sky Sports NFL from 9.25pm

The NFL’s best two best quarterbacks and the future of the league face-off in a mouthwatering match-up this week. Neither are named Russell Wilson.

It is Patrick Mahomes and Lamar Jackson who will meet on Monday night in arguably the most eagerly anticipated game of the season so far; the reigning Super Bowl MVP versus last year’s league MVP, who himself claimed the throne from 2018 winner Mahomes.

Wilson has not so much as received an MVP vote before.

Not in his sophomore season, in 2013, when steering his Seattle Seahawks to victory in Super Bowl XLVIII; not in 2016, when notching a career high in passing yards (4,219); not a year later, when another career-high – 34 passing touchdowns – also led the league and not when he improved on that mark with a further three in 2018 – only for Mahomes to put up 50!

When they ask u somethin’… tell ’em ur….. #UNLIMITED pic.twitter.com/832yylOTjy

Wilson has often been more underrated, under-appreciated and undervalued than he has been ‘unlimited’.
Until now.

Through the first two weeks of this season, Wilson has thrown for 610 yards and nine TDs (to go with only 11 incompletions), putting up five of those on the New England Patriots and the ‘supposed’ No 1 secondary in football last week.

It all means that it is Wilson who is currently the bookies’ favourite for MVP.

But Wilson is not out to play second fiddle to the rising superstar out in Kansas City – not anymore.

“I don’t come to play this game to be second place,” Wilson told reporters after the Patriots win, a game in which he became only the second player in the 20-year [Bill] Belichickian era to put up five passing TDs on his team, Drew Brees [2009] the other.

“If I’m not thinking that way [that I’m the best], then I’m crazy, because if you want to be great you have to believe in who you are and what you have, all the things that you do.

“I put tons of work into this game. I want to be the best in the world.”

Former NFL receiver Nate Burleson had this take on Good Morning Football: “You know what I love: I love that Wilson is kind of p***** off.

“You can tell by the way he is talking; ‘I haven’t come here to take second place’. That right there is saying ‘I came here to get the MVP’.”

But Wilson is out for more than just a MVP trophy. He won the Super Bowl when he was just 25 in his second season, went back to it – and lost – in his third and it has been a personal crusade ever since to win a second, third, fourth, fifth etc, but not yet coming close to doing so.

“He has made it clear that he wants to show the world what he can do; he is chasing immortality,” Florio added on Wilson.

“It’s the rings, especially with what Tom Brady has done [winning a record six], it’s the rings that determine whether or not you’re in the pantheon of all-time greats.

“Wilson understands; it’s not about one, it’s about multiple. If you have one Super Bowl championship to cap an illustrious career, you’re possibly Aaron Rodgers (to be determined). If you have zero, you’re Dan Marino. If you have six, you’re Brady.”

As Florio mentions, Wilson’s place in the pecking order, currently, is alongside Rodgers, Brees – both of whom meet on Sunday night in another epic Week Three contest – and youngster Mahomes, on one.

San Francisco 49ers represented the NFC in the Super Bowl last year – Seattle having pushed them all the way, only to come up millimetres short at the goal line on the final play, with the No 1 seed on the line – but the 2020 Niners are decimated by injuries.

Elsewhere in the West, the upstart Arizona Cardinals are a threat, if a little unproven, and the Los Angeles Rams are only 18 months removed from a Super Bowl berth themselves.

There’s also the aforementioned Rodgers and Brees to get past in the NFC – both just as eager to claim a second ring, albeit the former looking much more convincing through two weeks than the 41-year-old Brees, who is perhaps on his last hurrah.

There’s the high-octane offence of the Dallas Cowboys to contend with – their opponents this Sunday – as well as the added obstruction of Brady and his six Super Bowl rings, and that is before we even get to the likes of Lamar and Mahomes leading the way from the AFC.

That said, Wilson has been more impressive than them all two weeks into the season, seeming more decisive and determined than before.

“Right now, in my mind, they’re the Super Bowl favourite in the NFC,” Florio said. “Wilson has been mocked for being ‘goody two shoes’ throughout his career. He’s now becoming a ‘bad ass’ in his own way, by embracing that ‘I’m the best quarterback in football’.

“‘I’m done standing in the shadows. I’m done taking a back seat. I’m done being second fiddle to any other quarterback in the NFL’.”

Watch Russell Wilson and the Seattle Seahawks take on the Dallas Cowboys as part of the NFL Sunday night triple-header, live on Sky Sports NFL from 9.25pm.

Buffalo Bills quarterback Josh Allen is ‘one of the best playmakers in the game right now’, according to former NFL QB Chris Simms.

Allen, the third-year quarterback out of Wyoming, has completed 57 of 81 passes for 729 yards and six touchdowns in guiding the Bills to a 2-0 record.

“The plays he makes are astounding,” Simms told Pro Football Talk. “He’s one of the best playmakers in the game right now; their offence is dangerous.

“He might be the MVP of football, other than Russell Wilson, through two weeks.”

Who will replace the NFL’s injured stars?

Head coaches and general managers were forced to cast their eyes upon free agent lists, depth charts and practice squad options this week after injuries ravaged a bizarre NFL Sunday.

On a weekend that staged the thrilling match-ups that helped you forget fans were not present, a striking number of the league’s top players saw their campaigns come to an abrupt halt.

We take a look at those next in line as teams deal with their high-profile absences heading into Week Three.

For Week Three, Neil Reynolds goes up against the Sky Sports Golf double act of Jamie Spence – a big Green Bay Packers fan – and Gary Murphy, who has jumped on the Tom Brady-Tampa Bay Buccaneers bandwagon.

Click on the video above to watch Spence and Murphy make their Week Three NFL predictions.