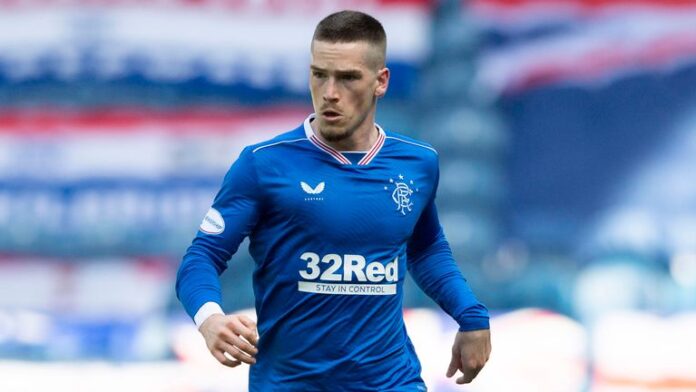 Watch Motherwell vs Rangers live on Sky Sports Football from 11am on Sunday; kick-off 12pm

Rangers manager Steven Gerrard says Ryan Kent does not need any England headlines right now despite his impressive start to the season.

The former Liverpool winger won a penalty, made an assist and scored his fifth goal of the campaign during Thursday night’s 4-0 Europa League win over Willem II.

However, Gerrard insists the 23-year-old should continue to concentrate on performing well for his club for the time being, and a potential England call-up will come naturally.

“I think Ryan should just continue to do what he’s doing, which is playing well and trying to find that consistency,” Gerrard told Sky Sports.

“Keep trying to keep the numbers in his games in terms of assists and goals. Everything else will take care of itself.

“I don’t think Ryan Kent needs any England headlines right now. I’m sure Gareth is looking at all the talent up and down the country and around Europe, but Ryan Kent just needs to focus on Rangers and keep doing well.

“As a player in my younger days, that’s what I tried to do for Liverpool and then international recognition comes naturally if you’re performing well for your club.”

‘Kent is not for sale’

Kent initially enjoyed a successful loan spell at Ibrox after joining Rangers for the 2018/19 season, which saw him win the PFA Scotland Young Player of the Year award.

He scored eight goals in 33 appearances last term as Rangers finished second in the league, and his displays have caught the attention of several clubs.

Gerrard confirmed Rangers had rejected an offer for Kent from Leeds last month, stating the bid was “nowhere near” the club’s valuation of the player, and he reiterated the club’s stance that they do not want to sell him.

“He had a really strong pre-season, I think that always helps with any player. If you can have a full pre-season and get games under your belt then it sets you up nicely.

“We’re really enjoying Ryan’s form at the moment. He’s bringing some real highs into the team. He was fantastic again [against Willem]. He changed the game for us from an attacking point of view.

“When you get these exciting players in this form it’s only natural that people are watching them from afar, but from our point of view he’s not for sale. We don’t want him to go and we want him to keep evolving here with us.”

Rangers travel to Motherwell on Sunday – live on Sky Sports Football – looking to continue their unbeaten start to the season.

Motherwell – who finished third last term – have won just twice in eight league games so far this campaign, but Gerrard is expecting an even encounter.

“I think they’ve had a difficult start to the season but they’ve got good players and a good manager,” the Rangers boss said.

“They’ve changed their style and they’ve gone in a few different directions over the course of the two years since I’ve been here.

“They were a very strong, big powerful, physical team at the beginning and made it really difficult. Then they started playing a lot more football, a lot more passing through the lines.

“They’ve changed a little bit slightly of late. They’ve gone into a deep block – 3-5-2 – and it worked ever so well at Aberdeen and they got a very strong, positive result.

“We expect something similar in terms of their approach and formation, and I think it’s even in terms of what they’ve put into the week as well.

“They’ve been away for a European game and I’m sure it was a lot of hard work for them as well, so it’s a game we’re looking forward to.”

Watch Motherwell vs Rangers live on Sky Sports Football from 11am on Sunday; kick-off 12pm.

The summer transfer window in Scotland closes at midnight on October 5.