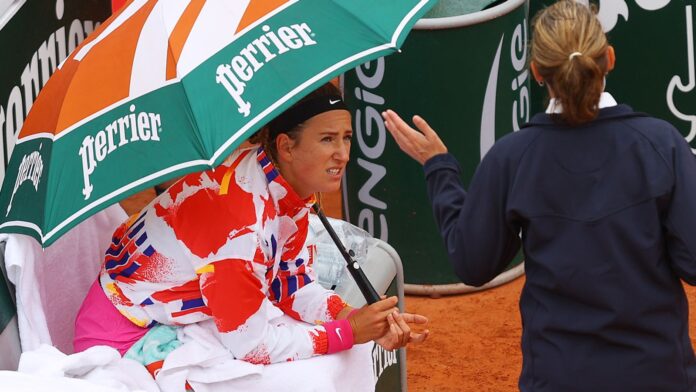 Victoria Azarenka refused to continue playing her first-round match against Danka Kovinic at the French Open because of the chilly autumnal conditions in Paris.

The tournament got off to an inauspicious start with US Open runner-up Azarenka unhappy at having to play on a deserted Court Suzanne Lenglen.

Rain was in the air and the wind whipping up the clay as Azarenka began her contest with Montenegrin Kovinic wearing a jacket.

After three games, which all went with serve, a chilly Azarenka sat down on her chair and demanded to see the supervisor.

She was asked to wait on court to see if conditions improved but refused, calling the playing conditions “a joke” and “ridiculous” before adding: “It’s eight degrees, I live in Florida, I’m used to hot weather.”

Speaking to her opponent from Montenegro, Azarenka said: “Do you want to wait on court?

“No, it’s ridiculous, it’s too cold. What’s the point? Sitting here like ducks,” said Azarenka, who put on a bright pink puffer jacket and walked off court.

Play continued on the rest of the courts aside from Simonne Mathieu, where Elise Mertens and Margarita Gasparyan refused to start their match, although they did subsequently get under way.

Azarenka and Kovinic returned after a delay of around 45 minutes when the Belarusian was in no mood to hang around, losing just two more games in a 6-1 6-2 victory.

Speaking on court, the US Open finalist said: “I’m glad that I’m able to finish and now I can watch everybody struggle with this weather. I’m happy for quite a strong start. It wasn’t easy but I felt I was pretty focused.”

Having initially refused to start the match, Mertens and Gasparyan then called a halt to play again in the third game because of slippery conditions before agreeing to restart once more.

Rain is forecast at Roland Garros for the next 10 days.

The tournament is being held amid a resurgence of COVID-19 cases in France with players and guests being submitted to a mandatory coronavirus test before being sent to two hotels, which they can only leave to play at Roland Garros or train in the neighbouring Jean Bouin stadium.