Home Culture Breonna Taylor’s death reminds me this country doesn’t love me as much... 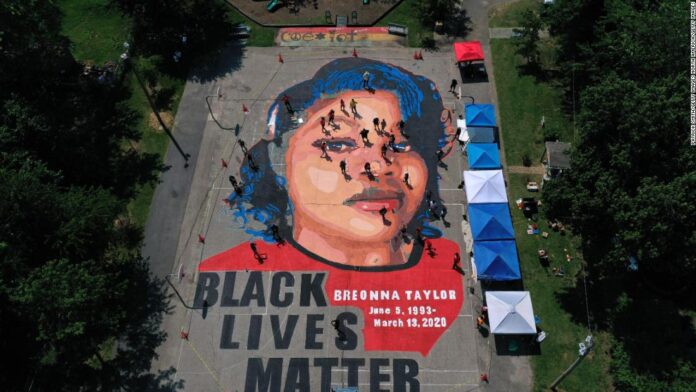 The death of Breonna Taylor has been yet another painful reminder that women like me, Black women, are not safe in America.
We can be killed in our own homes by police and an officer will be charged over the bullets that missed, a charge that came only after months of calls for justice.
Make no mistake, Breonna Taylor’s death wrought destruction – and not just for the family and friends who knew and loved her.
There has been constant outcry in the six months since Taylor, a 26-year-old emergency room technician, was shot in her Louisville, Kentucky, home while police were executing a search warrant.
She is just one more Black person whose life has been overshadowed in many ways by their death and who, sadly, have become symbols of the racial inequality that has always been, and feels like it may always be.
Such discouraging thoughts have become so familiar that I fear I am becoming numb to it.
The #SayHerName and #JusticeForBreonna campaigns have kept Taylor’s face ever before me on social media since her death. In that beautiful young woman’s face, I have seen my sister, my nieces, my friends and myself.
I have wept for her and us, even as I have shed tears for a country where many are just now seeing its problems with systemic racism and racial injustice.
Typing that word alone will stop many people reading and to those who feel that way, it is hard to know you are tired of my and Breonna Taylor’s Blackness.
Tired of hearing about it, thinking about it and feeling guilty about the disparity that it brings.
Imagine how tired we feel inhabiting these Black bodies. Because we live in a nation where being accused of racism angers people more than the fact of actual racism. A country where I am sure to be called a racist, accused of race-baiting and/or “playing the race card” for even daring to discuss our race problem.
To that I say: White mothers, talk to me about how you prep your White children, your sons in particular, to try and handle interactions with police so they can make it home safely. All the while knowing that no matter what you tell them there is no guarantee.
White wives, have your White husbands taught themselves how to change rear light bulbs in their cars so they can avoid being stopped by police? Because my Black husband has.
These are all constant traumas that Black women like me, like Breonna Taylor and so many other Black women I could, unfortunately, name, have had to endure.
A few weeks ago, I posted to Facebook some thoughts about what is happening in America right now—how none of it is a surprise to me because I know the history.
“I’m not shocked by the cruelty & divisiveness because I have forever snapshots in my brain of White people smiling beneath the mutilated bodies of lynched Black people,” I wrote. “Voter suppression doesn’t surprise me because I am the descendant of those threatened, harassed and blocked from polling stations.”
I pointed out that I “sprang from women whose children were ripped from their arms and sold, but those women had to keep on living and serving.”
“It’s why we bury our Trayvons and our Tamirs and then become activists and run for office. We give the world beauty for ashes on the daily, with food that is more flavorful because salt seasons and what’s saltier than tears?,” I posted. “We dance a little harder, sing a little louder and love a little deeper because we know life is fleeting and always has been. Covid kills us more, racism kills us more. Life. Kills. Us. More.”
Black people as a whole have struggled to have our humanity recognized and respected, but Black women in particular have taken that fight to the polls.
According to the report “Black Girl Magic: The Power of Black Women in Elections” put out by the AFL-CIO, “Black women drive turnout for the black community and are one of the most progressive voting blocs in the country.”
It continues: “They demonstrate high levels of support for progressive issues such as police reform, raising the minimum wage and protecting Social Security. Moreover, the majority of black women have an economically liberal view of government.”
To possess such power and still know that the laws we have helped bring to fruition will—so often–not protect us, feels excruciating.
It also fuels the burning desire to hold America accountable to “the justice and liberty for all” it promised.
Knowing this country doesn’t love me as much as I love it would seem reason enough to give up on it.
But I won’t let the deaths of Taylor, George Floyd or the others who have sparked a racial reckoning in this great nation have happened in vain.
I love this country too much to not want to see it be the best that it can be.