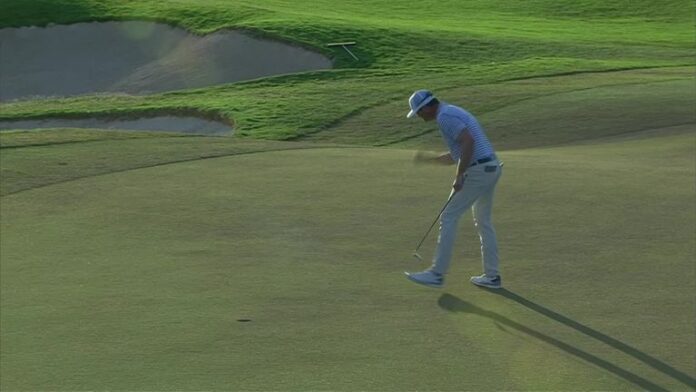 Victory secures Swafford invitation to the 2021 Masters Tournament, as well as next year’s Players Championship and PGA Championship

Hudson Swafford survived a back-nine scare to claim a narrow victory at the Corales Puntacana Resort and Club Championship.

Swafford saw a four-shot lead disappear in the space of three holes during a dramatic final round at Corales Golf Club, only to birdie the 17th and save par at the last and snatch a one-shot win.

The world No 345 signed for a three-under 69 to end the week on 18 under and a shot ahead of Tyler McCumber, with Mackenzie Hughes a further stroke back in third after a final-hole bogey.

Nate Lashley ended in fourth spot ahead of overnight leader Adam Long, whose challenge faded with a three-over 75, while Will Zalatoris posted a round-of-the-day 65 to jump into tied-eighth.

Starting the day two behind, Swafford saw the gap cut to one when Long failed to get up and down from the greenside bunker at the second and then moved into a share of the lead with a birdie at the third.

Swafford edged ahead by rolling in a 15-foot eagle at the fourth, only to see that lead quickly extend to three when Long followed a birdie at the same par-five with back-to-back bogeys from the sixth.

A two-putt birdie at the seventh and eight-foot gain at the next kept Swafford three ahead at the turn, but he then missed a six-foot birdie try at the 11th and took two chips from the bottom of a bank at the next to scramble a par.

Swafford hit another poor pitch at the 13th on his way to a double-bogey, which cut his lead to one when Hughes bounced back from his bogey at the same hole by picking up a shot at the par-five next.

The lead was lost when Swafford dropped a shot at the 15th, with McCumber holing a long-range birdie at the last to close a bogey-free 66 and make it a three-way tie at the top.

Swafford responded by hitting a superb tee-shot at the par-three 17th to set up an eight-foot birdie, giving him a one-shot lead heading to the last, before holing from a similar distance to save par at the last and register his second PGA Tour victory.

The win is Swafford’s first since the 2017 CareerBuilder Challenge, with the success securing him invitations to the Sentry Tournament of Champions and the 2021 Masters Tournament, as well as next year’s Players Championship and PGA Championship.