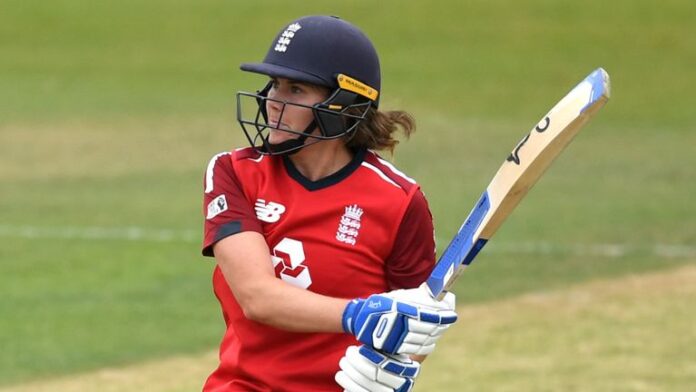 “The first two innings I was going a bit too big, too early which is something we are working on as a team but I think for myself to build into that is probably the best thing”

Nat Sciver was pleased by England Women’s “ruthless” streak as they sealed a series win over West Indies with two games to spare.

Sciver struck a T20I-best 82 from 61 balls as England won Saturday’s game by 20 runs to take an unassailable 3-0 lead in the five-match contest.

The home side’s bowlers then restricted West Indies as they failed to chase 155, despite Deandra Dottin’s aggressive half-century threatening to take the tourists to victory.

England will now be eyeing a clean sweep by winning Monday’s fourth game and then the final encounter on Wednesday, with both games live on Sky Sports and the Sky Sports Cricket YouTube channel.

“When we play we want to keep our standards high, no matter who we’re playing and make sure we’re practising to play against the best side in the world.

“We were under pressure as a bowling unit a bit more, they came out with a different order and Deandra scored some runs again.

“We were pleased to be under the pump with the ball a little bit but come through in the end.”

Sciver had made scores of seven and eight in the first two matches and revealed a change of mindset was key in her returning to form with a ninth T20I fifty.

“The first two innings I was going a bit too big, too early which is something we are working on as a team but I think for myself to build into that is probably the best thing,” added the all-rounder, 28.

“When you [bat in the first six overs], you feel like you need to get away fast and make use of the two fielders out.

“But as long as I could run the singles well and get it out into the outfield then when I did get my chance I could take advantage.”

West Indies captain Stafanie Taylor said: “We now have to come out banging in the last two games, we have nothing to lose.”