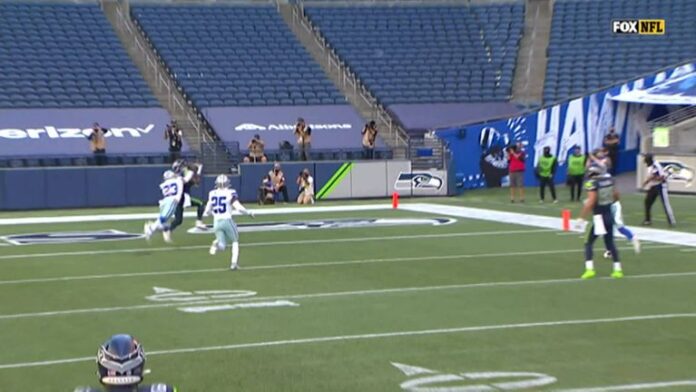 Russell Wilson threw five touchdown passes for the second consecutive week, including a go-ahead 29-yarder to D.K. Metcalf in the final two minutes, as the Seattle Seahawks beat the Dallas Cowboys 38-31 in a thriller.

Metcalf made up for a huge first-half blunder in scoring the game-winner; earlier, the Seattle receiver appeared to have a walk-in touchdown after hauling in a deep ball from Wilson late in the first quarter, but he slowed up to celebrate before he was in the endzone and Cowboys cornerback Trevon Diggs knocked the ball loose.

Wilson’s five scores ensured the Seahawks quarterback set a new record for most touchdown passes thrown in the first three games of a season with 14. Kansas City Chiefs QB Patrick Mahomes threw 13 TDs in his MVP season in 2018.

Three of his Wilson’s touchdowns went to Tyler Lockett, who had nine receptions for 100 yards, as he became his favourite target after Metcalf’s error.

Dallas trailed 30-15 after Prescott fumbled on the first play of the second half and Wilson subsequently threw his fourth TD. But Prescott then appeared to be leading a Cowboys comeback with touchdown passes of 42 yards to Cedrick Wilson and 43 yards to Michael Gallup.

Greg Zuerlein kicked a 42-yard field goal with four minutes left in the fourth quarter to give Dallas a 31-30 lead but, after Wilson and Metcalf’s TD connection, Ryan Neal intercepted a Prescott pass in the endzone with six seconds remaining to clinch victory for Seattle (3-0).

Zuerlein had kicked a 43-yarder on Dallas’ first possession of the game before Wilson hit Lockett for a 43-yard TD to see Seattle into the lead.

Cowboys running back Ezekiel Elliott, who was limited to 34 yards on 14 carries, was stopped for a safety in the endzone on the next series, although he then went in for a one-yard touchdown to tie the score up at 9-9 through one quarter.

Two second-quarter TDs of one yard from Wilson to Lockett – either side of a 42-yard scoring strike from Prescott to Wilson – ensured a 23-15 lead for Seattle at the half.

The Seahawks stretched that advantage early in the second half after Prescott’s early fumble – Wilson next finding Jacob Hollister in the endzone – but the Cowboys (1-2) continued to fight, taking a late lead before Metcalf’s TD won it for the Hawks.