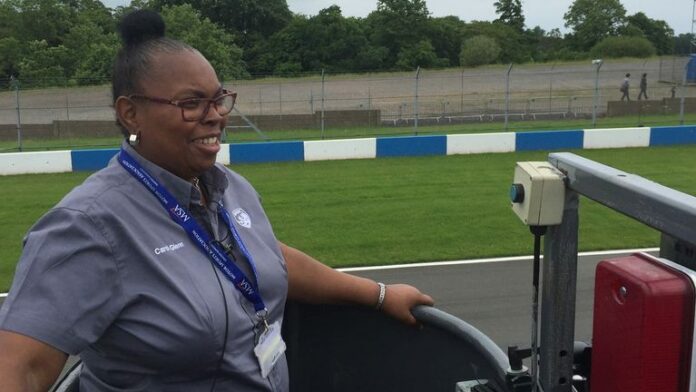 How two black trailblazers, from different ends of the motor racing spectrum, are trying to address the sport’s lack of diversity

Lewis Hamilton may not have equalled Michael Schumacher’s record of 91 Grand Prix victories at the weekend but Carol Glenn is determined he won’t be the last black motor-racing record breaker.

As the first black woman to become a UK race official, Glenn is a trailblazer in her own right but is already looking to the future by focusing on the next Lewis Hamilton by setting up a new racing academy called Next Racing Generation Racing.

“I’m hoping that’s going to be my legacy,” Glenn told Sky Sports News. “I’ve got ten or twelve drivers in karting and trying to get them to the next step into motorsport.

“It’s not just about helping their racing though – it’s also about helping circumnavigate going for interviews and their education.

“A lot of them are fourteen [years old] upwards so choosing the right subjects, making sure what college and university they are going to go to is important.

“I’m hoping to help parents get through this maze and unravel that so we have a plethora of drivers coming through the system and we shouldn’t have to wait ten years for another one.”

Glenn is hoping to gain some financial support from Hamilton’s own commission the world champion set up to improve equality in the sport.

Ahead of the Russian Grand Prix, Hamilton said: “Representation is insufficient across every skillset, from the garage to engineers in the factories and design departments. Change isn’t coming quickly enough and we need to know why.”

Glenn couldn’t agree more, recounting her own experiences of racism and discrimination as she tried to make it into a sport that appears to be inaccessible to minorities.

“Because I used to live in Lewisham, south east London, people would look at me and wondering what I was doing and why I was there,” Glenn said.

“They would say, ‘careful, she might pinch the tyres from your car or the stereo’. I used to have jokes about my boobs, my bum – all those sexist and racist comments.

“It’s quite hurtful because I’m not a gangster, I’m not a drug dealer and you can’t say that all black people are those.”

Glenn, who officiates at races across Britain and aims to become an F1 steward one day, also believes there is a significant lack of appreciation for the achievements of Hamilton.

Hamilton remains the only black driver in Formula 1 history and is currently on course to become world champion for a fourth successive year.

“He’s not been a champion once or twice or three times, he’s six-time world champion, but I think he gets the worst plaudits ever,” Glenn added.

“He’s not recognised; all people want to do all the time, what we call the ‘Hamilton Haters’ is put him down – nobody wants to talk about all the records he’s broken.

“He is our greatest global driver but because he’s black there’s that sort of ‘we can’t quite support him because of his lifestyle, his money’. Schumacher, Senna they all had extravagant lifestyles but nobody made a big deal about that.”