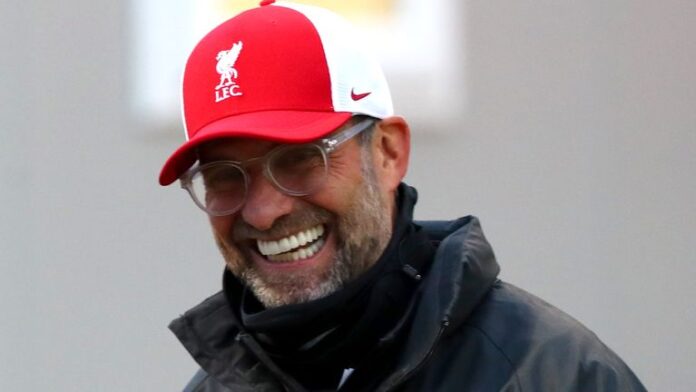 Thiago joined Liverpool from Bayern Munich last month in a deal worth up to £25m, arriving at Anfield with a huge reputation having won 11 league titles in his last 12 seasons with Bayern, and Barcelona before that.

An injury to Jordan Henderson saw Thiago thrust into action after the interval against Chelsea, just 48 hours after joining the club. And Thiago did not disappoint, completing a record-breaking 75 passes, the most of any player playing at least 45 minutes in a Premier League game since Opta stats began.

Klopp says the 29-year-old’s skillset makes him an “interesting package” but insists the Spain international remains eager to continue to develop and improve.

“You saw it [against Chelsea]. Some things are natural for him that are not natural for other players, but we won the league and we won the Champions League without Thiago. He won it with Bayern, so obviously it is a good fit I would say, but we now have to get used to each other.

“There are very special things [he has that separates him from others] in world football. His vision is exceptional, pair that with pretty good technical skills, and a nice passing ability and these kind of things, and you become a really interesting package. That’s what Thiago is.

“On top of that as a guy, he couldn’t be better. It’s incredible, when you give him a ball, he is still a kid. And when you take the ball away he is a really mature and experienced football person, who is interested in a lot of things, tactics and all these kind of things. He wants to learn which is very important.”

Thiago joined Liverpool either side of the arrivals of Kostas Tsimikas and Diogo Jota, with the club’s transfer business now looking increasingly focused on departures.

Liverpool have more than 30 players in their first-team squad, and Klopp indicated the number of players he currently has at his disposal is at an unsustainable level.

“You cannot or you should not have a 30-player squad. That makes no sense we don’t have enough games for that,” he said.

“The schedule for professional football players, especially if you play for the national team, is really on the edge and we try to do what we can by rotation.

“We will see how we can sort it, but you cannot leave a team in the garage and take them out every two or three weeks. It’s not like an old car in your garage and on a Sunday you take it out.

“There will be difficult situations where you miss a player here or there so we will see how we can deal with that. But 30 players for sure is not something we are looking for.”

Henderson ruled out of Arsenal visit

Joel Matip has yet to return to training either, but the Premier League champions are boosted by Joe Gomez being involved again.

“I think Joe should be back today in training, that’s what everybody told me – and nobody told me something different since,” said Klopp.

“Billy [Koumetio] is back in training. Joel not, pretty much. Hendo not yet, that was clear – this game is for sure too early. I think that’s it, pretty much.”

Klopp: Arteta ‘has changed the mood at Arsenal’

Liverpool are unbeaten in 60 home matches in the Premier League, but Klopp is aware his side face a difficult test against Arsenal, who have also won their opening two league matches.

Asked what Arteta has brought to Arsenal since his arrival in December, Klopp said: “He has shown in a short period of time that he seems to be an exceptional football manager.

“The structure of the team he sets up is exceptional – balance between offence and defence is really good. You can see good organisation and freedom for the players, using them in the right places. He has changed the whole mood in the whole club.

“I don’t think a lot of people thought at the end of the season he would finish by winning a competition and he did that by winning the FA Cup.”