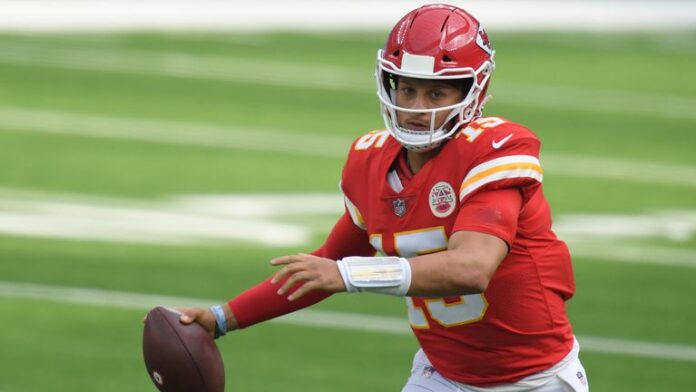 It’s as if Week Three had predicted its predecessor’s sombre injury report and in turn recognised the need to lift moods across the NFL.

The response? How about pitting Patrick Mahomes and Lamar Jackson against each other for the third time in their glittering careers, delivering a teaser of the AFC Championship game we’ve all dreamt about in the process?

The one condition, hopefully, being that both are spared of harm following a game week in which Saquon Barkley, Nick Bosa, Christian McCaffrey, Drew Lock, Courtland Sutton and many more went down with injuries.

It’s advantage Mahomes in the matchup between the NFL’s lead poster boys, the Chiefs running out 33-28 winners over Jackson’s Ravens in September last year after clinching a 27-24 overtime victory in December 2018.

Monday beckons as an opportunity for John Harbaugh’s men to lay down an early marker in their bid to dethrone the Super Bowl champions after defeat to the Tennessee Titans in last season’s Divisional Round dashed hopes of facing the Chiefs for a place in Miami.

Between Mahomes and Jackson the pair hold the highest combined win percentage by opposing starting quarterbacks in the Super Bowl era (.825), the former making jaw-dropping throws habitual while his counterpart has torched defenses with his rushing threat amid a fine effort to quash doubts over his ability as a passer. The outcome of Monday’s game, however, could be reliant on more than the stars under center.

For all that can be said about the Chiefs’ brawn on offense, their defense cannot afford to start as slowly as it did in last Sunday’s overtime win against the Los Angeles Chargers. This Ravens team just isn’t that forgiving.

There are still weaknesses on a unit that took time to adapt to defensive coordinator Steve Spagnuolo’s scheme at the beginning of their Super Bowl-winning season. The Chiefs allowed at least 180 rushing yards in four of their first six games in 2019, before limiting two of their next three opponents to below 100 yards on the ground.

From Week 10 to 17 they allowed the fourth-lowest completion percentage in the league (57.36) and the fourth-fewest yards per attempt, as well as tying first for fewest touchdowns allowed in that period and coming down with a joint-most 10 interceptions alongside five other teams.

A contrast in production was somewhat mirrored against the Chargers when the Chiefs followed up a disjointed start by keeping their opponents out of the endzone for the last 40 minutes of the game.

In the opening drive of the day Joshua Kelley raced clear for a 35-yard catch and run from a checkdown, with minimal hustle from Damien Wilson and L’Jarius Sneed in chasing down the rookie back combining with a poor angle and tackle attempt from Anthony Hitchens in allowing a more significant gain than necessary.

Second-year safety Juan Thornhill was later guilty of allowing Austin Ekeler to breeze by for a first down on a second-and-seven for what might have been a loss of yards.

It all set the tone for a half of missed tackles and a lack of variation on what was unrewarded consistency in pressuring up the middle (aided by Justin Herbert’s quick release) in leaving Spagnuolo with food for thought.

Herbert was picking the Chiefs secondary apart in stages, cornerback Rashad Fenton biting on the presence of Keenan Allen and consequently failing to cover Jaylen Guyton on the outside as he hauled in a perfectly-weighted 14-yard touchdown pass.

The poor execution and lack of immediacy defied the talent on the field. Follow suit, and they will be punished by a team that averaged the most first half points so far this season heading into Week Three.

On Monday they meet a Baltimore team built to capitalise on the allowance of an extra three of four yards through poor tackling, not to mention a failure to consistently create pressure.

The Chiefs have also never come up against this Lamar Jackson. A focus on lane discipline as a mean of containing him in the pocket just isn’t enough anymore, with Harbaugh and Greg Roman threatening to make an astute passer out of the league MVP.

Cover the likes of Hollywood Brown on the outside, and he’ll just find ever-reliable tight end Mark Andrews up the seam.

The Chiefs entered the weekend 28th against the run following their wins over the Houston Texans and Chargers, preparing to stifle a fourth-ranked Ravens rushing attack that is still warming up.

Offensive coordinator Roman has so far been true to his word with regards to his variation in the backfield, the use of rookie J.K. Dobbins, Gus Edwards and veteran Mark Ingram so far preserving the legs of Jackson until completely necessary.

The Chiefs’ footballing IQ will be put to the test by a team that led the league in pre-snap motion and the use of 22 personnel (two running backs, two tight ends, one wide receiver) over the first two weeks of the season. Baltimore love to leave defensive coordinators guessing, which makes for a big night for Spagnuolo.

On the other side of the ball, the Ravens have one of the best defenses in football to match, Calais Campbell’s offseason arrival adding another pass rush threat ahead of ballhawk cornerback Marcus Peters and exciting rookie linebacker Patrick Queen.

Harbaugh’s men are beginning to look like one of the most complete outfits in the league, with the weaponry to hurt a slow-starting defense and the playmakers to hold off Mahomes, at least for a little while.

But let’s not forget, this is Mahomes, this is Travis Kelce, this is Tyreek Hill, this is Clyde Edwards-Helaire, this is Andy Reid. When this Chiefs side goes down, as it did against the Texans in the playoffs and against the Chargers last week, we have all grown to expect that it will pull itself up off the canvas.

Can the Ravens build a big enough advantage? Can they hold off that wand of an arm?

So many questions. But the Ravens will know they have never been better prepared to see off arguably their closest rivals in the battle for AFC honours.