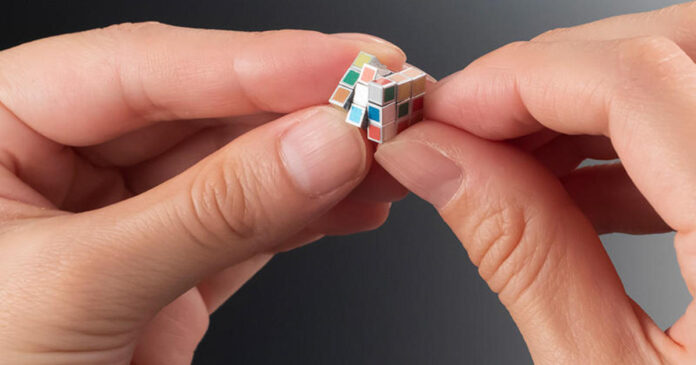 Tokyo — A Japanese company has created what it’s billing as the world’s smallest working Rubik’s Cube. Measuring a mere 0.39 inches and weighing less than a tenth of an ounce, the “ultra-precision” aluminum toy, which comes with its own pedestal, is tiny enough to fit on a penny or a postage stamp.

“We sought to create an exact tiny reproduction of a Rubik’s Cube,” said Kensuke Tsuchiya, a University of Tokyo expert on “micro manufacturing” who appears in a promo video for the tiny cube. “Making something that was impossible until now… was fun and exciting.”

Japanese toymaker MegaHouse began taking orders last week for the product, which is going for a bit more than its larger predecessor. The mini cubes are priced at about $1,900.

The Japanese were early and enthusiastic Rubik’s Cubers. Since the original six-sided cubes debuted here in 1980, over 14 million have been sold — 4 million within the first eight months alone.

While the Lilliputian toy was issued to commemorate the 40th anniversary of the Rubik’s Cube in Japan, its launch during the pandemic has also proven timely. With residents spending more time at home, the company reports sales of all Rubik’s Cubes up 50% over the same period last year, boosted by online tutorials that demystify the twists and turns.

MegaHouse, a subsidiary of toymaker Bandai Namco Holdings, developed the tiny new version of the puzzle with Iriso Seimitsu, a metal processing company based outside Tokyo in Saitama Prefecture.

Rubik’s Cubes were originally made from wood and colored stickers and called Magic Cubes. They were invented in 1974 by Hungarian architect Erno Rubik to give his students a better grasp of three-dimensional problems. It took the professor a month to solve his own puzzle.

Now, world-champion “speedcubers” can unscramble the cube in a few seconds. No small feat, considering there are 43 quintillion different ways to twist up a cube.

The puzzle has popped up in episodes of The Simpsons, The Big Bang Theory, at the renowned Burning Man festival, and in over a dozen movies, including Being John Malkovich, several Spiderman films, The Pursuit of Happyness and Snowden.

They are widely used in school classrooms as a math tool.

There are dozens of spinoffs of Erno Rubik’s invention, including a diamond-encrusted version issued in 1995. MegaHouse created a cube in 2018 made of posh “Kutani” porcelain, and it now sells 16 different versions of the puzzle.

At a launch event for the mini-cube, 2011’s one-handed Rubik’s champion Arifumi Fushimi told reporters that, despite it fitting on a single fingertip, new cube “was very easy to twist. The movement was very smooth.”

He warned, however, that “at that size, if you don’t watch it, you’ll end up losing it!”