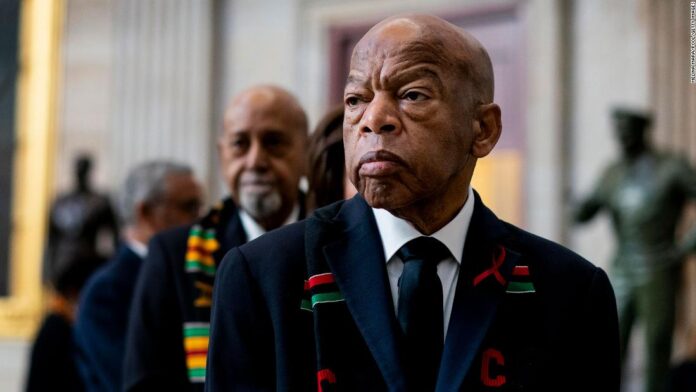 Her goal was not only to help viewers become more familiar with Lewis’ astonishing accomplishments — from his fearless work during the civil rights movement to his lauded persistence as a legislator — but also to show some of his easygoing relatability.
“I felt like we were in danger of kind of canonizing the congressman, and forgetting that he’s a flesh-and-blood human being,” said Porter. “Because if you say that he’s a deity, then you and I think, ‘Well, I’m not that and there’s no room for me here. There’s nothing I can take from this life except to admire it.'”
With “John Lewis: Good Trouble,” produced in partnership with CNN Films, Porter said she wanted to show that the opposite is true. She spent a year filming with Lewis, aiming to capture all parts of his personality — from the solemn to the silly.
The result is a film that mixes rare archival footage with more contemporary campaign trail speeches, alongside scenes of the congressman cracking jokes about his chickens and sheepishly admitting that his home isn’t quite as tidy as he’d like as the cameras head inside.
“I wanted to make John Lewis a living, breathing person who is not always giving motivational speeches on a bridge but is also dancing and listening to music and telling jokes,” Porter continued.
And rather than be intimidated by the magnitude of all that Lewis has done, we could look at his example and ask, “What does this mean for my life?” she continued. “What can I do? I have the same goals of peace, of prosperity, of equality; what’s my contribution to the attainment of those goals?”
We spoke with Porter about working with Lewis, and in the course of that conversation she shared fresh insight into Lewis’ philosophies and approaches to a life well led. Here are six of those lessons:

1. Always do what you can, no matter how small

There were moments during filmmaking when Porter would turn to Lewis and admit that a new headline or story had left her shaken.
And while Lewis may have shared her concerns, “His approach was to start focusing on what he needed to do,” Porter said. “I noticed that he always, when confronted with any problem, he wouldn’t just shake his head and say, ‘That was such a shame.’ He would always think about what he could do rather than focusing on what he couldn’t do — even if what (he) could do is small. It was such a different orientation.”
Eventually, this habit of taking action, no matter how seemingly insignificant, left Porter feeling empowered.
“There’s always something you can do,” she continued. “And if you put your energy towards focusing on that, it’s a lot more productive than focusing on all the things that you can’t do.”

2. Be prepared to be persistent

Lewis, Porter observed, wasn’t one to look for immediate gratification. “He was looking to a long-term, systemic change,” she said. It’s about “adjusting the expectation both to what is practical, but then having vision for what is possible going forward. … That’s why you see a John Lewis who can introduce the legislation to put the African American History Museum on the (National) Mall every year for over a decade.”
Lewis was someone who was skilled at holding both ideas at once, Porter added. “He was able to say, ‘This is what I need to do tomorrow, and this 20 years from now is what I hope has happened. (And) I’m going to focus on both things at the same time; I’m keeping that long-term vision, but I’m not losing sight of what I need to do (short-term).”

3. Find your joy, and hold onto it for balance

While John Lewis “lived for making a difference,” Porter said, he also “lived to live.”
You could see that, for example, in his incredible art collection in the film. “That’s having a full life; that’s what being free is,” Porter continued. “Freedom to pursue all of those things — art and music and poetry — and all of that, to me, is what real freedom is. And I think he attained that. And I think as a result he was just a very strong, calm, assured person in a very grounded way.”
Lewis, the director said of their time spent together, “was really living his best life. You know, he was doing what he was supposed to do; he loved going to Costco. He loved going to look at antiques, he loved his little chickens.”
Watching Lewis devote himself to his life’s work while also finding time for personal pursuits “made as much of an impression on me as anything that he really worked on,” Porter said. “There were so many different parts of his life — not everything was perfect, but you could tell he was putting the effort into the things he cared about.
“I think our problems are so large that they can swallow (up) the people who try and help,” she added. “And I think John Lewis pretty successfully resisted, you know, being swallowed up that way. I think he carved out a private space that was very satisfying.”

Spending time with Lewis as he engaged with constituents and attendees at events, Porter took note of how he embraced his background as a sharecropper’s son.
“Some people might be ashamed of coming from really what has an impoverished background, and some people might just use it for political expedience,” Porter said. But Lewis saw it as a way to connect — he “reveled in talking about that shared experience,” the director observed. “He never wanted to forget it. He never wanted to leave it behind. He wanted it to be front and center in people’s understanding of him.”
Porter sought ways to reflect that sensibility in the film’s score. She turned to composer Tamar-kali, a Black American woman with Southern roots, to craft what Porter calls a “modern spiritual, because it felt like Lewis connected the past and the present. He really always brought up the past in a way to honor it, and I wanted to draw that connection musically.”
Tamar-kali nailed it, the director continued; throughout the film, “it felt like, if John Lewis were a song, this is what he would be,” she said.

Reflecting on Lewis’ upbringing, Porter said that was another source of inspiration for her. “During that time, when he was having those experiences, when you wouldn’t blame him for just thinking about whether he was going to get enough to eat, he was thinking about freedom with a capital F,” she remarked. “That’s also why I celebrate (Lewis); he never let the circumstance limit his imagination. …. This man came from walking up and down in the hot sun, (with) blisters and, you know, picking enough so that they could do the subsistence living, to writing the laws of America.”

After spending a year with Lewis filming in multiple locations, Porter said she remembers clearly how Lewis was “just relentlessly optimistic” wherever they happened to be, and it left a permanent impression.
“I felt that very acutely while we were working on the movie and then after he’s passed,” she said. “And I thought if John Lewis, with what he’s experienced and what he’s seen and what he’s worked on, can be optimistic, I can do that, too.”