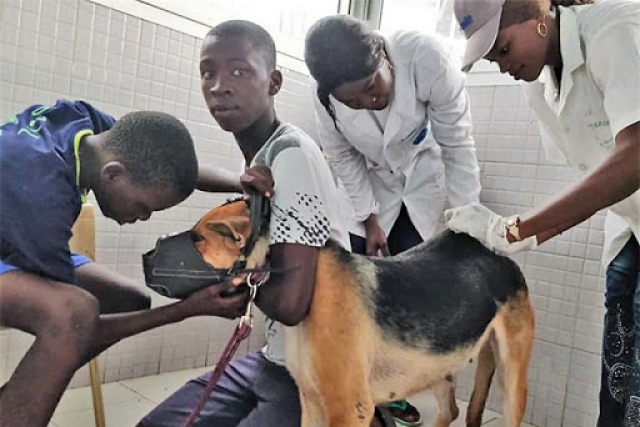 In Côte d’Ivoire, rabies is endemic. To eradicate it, all sectors involved in public health have given priority to this animal disease since January 2017 by developing a national strategy for integrated rabies control in order to reach the global objective of zero cases of human rabies by 2030. This three-year strategy (2016-2018) has been developed using a transdisciplinary and One Health approach by a dedicated rabies working group involving stakeholders from public health, animal health and the environment.

René Bessin, Country Team Leader of FAO’s Emergency Centre for Transboundary Animal Diseases: “The National Institute of Public Hygiene (INHP) of Côte d’Ivoire records an average of 20 rabies-related deaths each year. However, estimates based on a model applied by the Global Alliance for Rabies Control suggest that this figure would rise to 569 deaths annually and that dog vaccination coverage would be 0.80 percent”.

A major step forward in the country’s commitment to the global fight against this zoonosis, transmitted from animals to humans, is the creation of a multi-sectoral and multidisciplinary research group to take stock of the rabies situation.

This group succeeded in estimating the dog population in Côte d’Ivoire at 1.5 million dogs, calculating the bite rate in households at an average of two per one thousand inhabitants and identifying the impact of awareness raising, with 70 percent of bite victims having been vaccinated using a free intradermal protocol.

It is precisely this awareness of the negative effects of rabies and of a possible death from exposure to a bite that alerted the community, increasing its vigilance and participation. Such community awareness sessions, for example, have led to an eight-fold increase in the number of cases of animal rabies reported in the department of Bouaké.

Côte d’Ivoire developed the SARE (Stepwise Approach towards Rabies Elimination) assessment tool, another tool to guide the planning, monitoring and evaluation of rabies control programmes. SARE assessments conducted in 2016 and 2018, revealed that Côte d’Ivoire has gone from level 1 to 2.4 out of 5, which means that it is a country where a national rabies control strategy has been developed and is being implemented.

Dog vaccination is key to stopping the transmission of rabies between dogs, and from dogs to humans. By preventing rabies transmission at source, the vaccination of dogs is a cost-effective and sustainable way to save lives. As such, rabies control at the animal source is one of the strategies adopted by the Directorate of Veterinary Services. With support from its partners in this fight (FAO, OIE, WHO, USAID, GARC, among others), Côte d’Ivoire conducts an annual pilot mass vaccination campaign of the canine population, proving the feasibility of achieving the vaccination coverage objectives at the departmental level.

For example, the local office in Bouaké of the Institut National d’Hygiène Publique (INHP) in collaboration with the local veterinary service celebrated the 13th World Rabies Day at the regional level in 2019. On average the Gbêkê region reports one confirmed case of human rabies and three to five cases of canine rabies every year.

As reported by the Director of Veterinary Services, Mr Kouadio Adaman, “Rabies claims victims among the population every year. The rabies situation is described as ‘a great concern’ and the authorities in Côte d’Ivoire are aiming to eradicate the disease by 2030.”

The progress made since 2018 is encouraging. The aim is to further strengthen support at local and national level and to maintain political decision makers’ involvement, so that Côte d’Ivoire can become free of dog-mediated rabies by 2030.