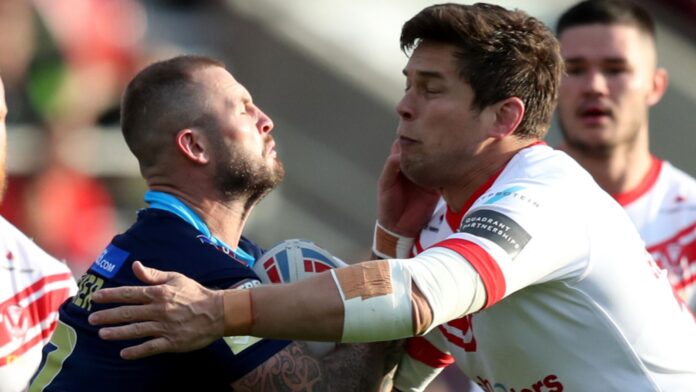 From the moment he arrived at St Helens, Kristian Woolf was left under no illusions about what the derby matches with Wigan Warriors meant to the club’s supporters.

The 45-year-old has been involved in club rivalries before back in Australia and was already aware of the history between Saints and the Cherry and Whites prior to arriving in Super League.

But Woolf was quickly brought up to speed on just how important these encounters are to both clubs and he will experience it for the first time on Tuesday evening when the old rivals clash at the behind-closed-doors neutral venue of the AJ Bell Stadium, live on Sky Sports.

“Once I stepped foot in town, the fans certainly made me really aware of the game they expected us to win and the game which meant most to them,” Woolf said. “Getting here, I’ve realised a little bit more the importance of it and the rivalry involved.

“I’d also say the rivalry here and something that’s very enjoyable about the game here in Super League is you’ve still got those really traditional, old rivalries which do carry a lot of importance.

“It’s probably been lost a little bit in the NRL and while it’s there, it’s certainly a little bit stronger over here, I think.”

Once I stepped foot in town, the fans certainly made me really aware of the game they expected us to win and the game which meant most to them.

Woolf is no stranger to rivalries, having seen from both sides the clashes between North Queensland Cowboys and Brisbane Broncos from his time on the coaching staff at both clubs.

He has seen it on the international stage too as Tonga head coach in the matches against Pacific Island rivals Samoa, which has given him an inkling of what to expect when St Helens and Wigan go head-to-head.

“They’re terrific, and I’d expect there are a lot of similarities there [between St Helens and Wigan matches],” Woolf said.

“Tonga and Samoa are really close allies in a lot of ways and have a lot of respect for each other, but at the same time when they play each other on the sporting field it is their closest rivalry and main rivalry, and one both teams get up for.”

By contrast, opposite number Adrian Lam is a veteran of these matches, having been involved in the derbies both as a player during his time with Wigan and now as a head coach.

Despite enjoying plenty of success against Saints during his playing days, including in the 2002 Challenge Cup final, the 50-year-old has yet to taste victory against them as a coach and is naturally keen to do that on Tuesday evening.

“I didn’t think about that, but it’s something we want to do this year,” Lam said. “My time here as a player, we were actually quite successful against them through a period where they were dominant.

“We’re trying to pass on that knowledge and experience through to our young ones.

There’s no bigger arch-rivalry in our sport right across the world than ours we have, fortunately, with our neighbours in St Helens.

“There’s no bigger arch-rivalry in our sport right across the world than ours we have, fortunately, with our neighbours in St Helens.”

It will not be easy for Wigan though because while St Helens have a near-full squad to choose from, Lam is having to rotate the team as they are in the midst of a period which sees them play three games in eight days – climaxing with this Saturday’s Challenge Cup semi-final against Leeds Rhinos.

Lam has therefore put his trust in the Warriors’ up and coming youngsters for the derby match, which has brought back memories of when a youthful Wigan side turned the tables on Saints in the 2003 Good Friday clash.

“I mentioned to them I was in a similar situation to this a long time ago and even to this day, it’s a memory I’ll never forget until the day I die,” Lam, who played at scrum-half that day, said.

“They’ve got their opportunity to create their own little legacy there, but when you look around the players there is quality in the squad outside of them, so there is help everywhere.

“Those players have a got point to prove as well, so I hope to go into the game with a lot of energy and players playing for a potential place in the 17.”