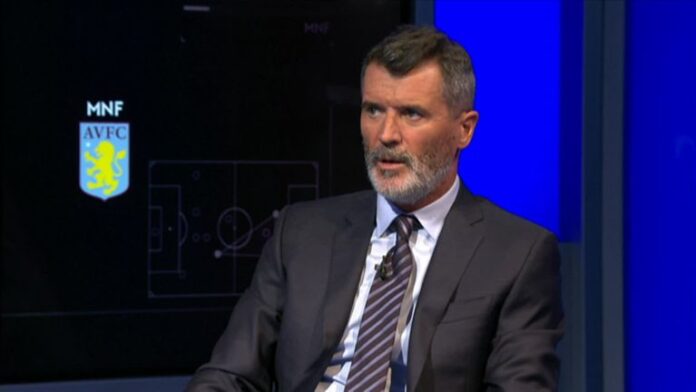 Roy Keane tells Sky Sports: “Ole will probably have to get his hands on a trophy. I think the honeymoon period is certainly over, and the pressure starts to mount now”; Man United lost opening match of new Premier League season to Crystal Palace

Roy Keane believes Ole Gunnar Solskjaer needs to guide Manchester United to a top-four finish or win a trophy this season if he is to keep his job as manager.

United finished a distant third in the Premier League last season, 33 points off champions Liverpool, and Keane reckons Solskjaer cannot afford for that chasm to repeat itself this time around.

“The remit will be different for Ole this year,” Keane told Monday Night Football. “I think last year, it was about getting into the top four – I know they got to three semi-finals – but it will be higher this year.

“They will certainly have to get a bit closer to Liverpool and Manchester City. The points total cannot be the same as it has been over the past three or four years.

“Ole will probably have to get his hands on a trophy. I think the honeymoon period is certainly over for Ole, and the pressure starts to mount now, particularly with the performances like that over the last week or so.”

“It’s early days but they’ve given up a lot of goals and a lot of chances against Crystal Palace and Brighton so the signs aren’t great. It would be different if it was against Manchester City or Liverpool.”

United’s haphazard performance against Brighton left much to be desired as Bruno Fernandes’ penalty in the 100th minute secured a dramatic 3-2 victory on Saturday.

Keane, who won 13 trophies with United including seven as captain, expects his former club to find the going tough this season at the start of Solskjaer’s second full term in charge.

“It’s not been great,” Keane continued. “Obviously, they’d have been pleased with the result against Brighton. But there are worrying signs already in the first week.

“It’s early days but they’ve given up a lot of goals and a lot of chances against Crystal Palace and Brighton so the signs aren’t great. It would be different if it was against Manchester City or Liverpool, with their brilliant attacking players but you’d expect them to have done better against Palace.

“The chances Brighton created… everyone’s focused on defensively how poor they’ve been, but as a whole team, it’s not been great with the amount of chances they’re giving up.”

Manchester United have lost the ability to do the “dark arts of transfers” and supporters have received “mixed messages” about the club’s financial position, according to football writer Andy Mitten.

United bought Donny van de Beek from Ajax in a deal worth up to £39m, but the midfielder remains their only summer arrival despite efforts to sign £108m-rated Borussia Dortmund winger Jadon Sancho and Porto left-back Alex Telles.

Mitten – the editor of fanzine United We Stand – says supporters do not believe in the club’s strategy and referred to a recent conversation he had with a former United player.

“United fans do not have a lot of faith in the club’s recruitment policy. They feel that there has been mixed messages,” Mitten told Sky Sports News.

“Back in March/April, Ole Gunnar Solskjaer said the club could perhaps take advantage of the coronavirus situation because they might be in a stronger financial position, but at one point United were the only Premier League team not to sign a single player in this transfer window.

“One former player said to me this week – a legendary United player – that the club have lost the ability to do the dark arts of transfers.”