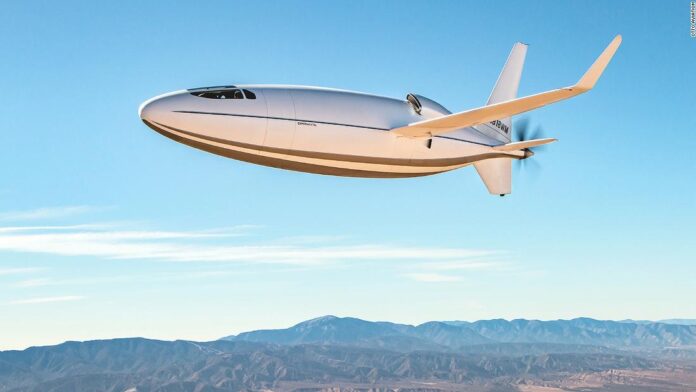 A mysterious bullet-shaped plane was spotted at the Southern California Logistics Airport near Victorville in April 2017. Its unusual design prompted immediate speculation, with military website The War Zone being the first to report that the aircraft was the work of California-based Otto Aviation — and that development was very much under wraps.

Now, in the late summer of the strangest year in aviation history, the Celera 500L has finally been revealed to the world, with the launch of a new website and a bunch of very cool new photos.

What we’re looking at is a six-person private craft that promises to fly at jet speeds, but with eight times lower fuel consumption, and a range that’s twice that of a comparably sized craft.

Bold claims indeed. Otto Aviation says on its website that 31 successful test flights have so far been performed, with aerodynamic efficiency proven in 2019, bolstering its declaration that “the Celera 500L is the most fuel-efficient, commercially viable aircraft in existence.”

The company, founded in 2008 and an offshoot of Bill Otto’s Otto Laboratories, says that the Celera 500L runs at 18 to 25 miles-per-gallon fuel economy (compared to the 2-3 miles-per-gallon of a comparable jet aircraft).

Then there are the modest $328 hourly operating costs, which are about six times lower, and the generous 4,500-nautical-mile range. Maximum cruise speed is projected to reach more than 460 miles per hour.

“Our goal has always been to create a safe and private aircraft that would allow for direct flights in the US at speeds and cost comparable to commercial air travel,” company CEO Bill Otto Jr. tells CNN Travel.

The range is such that the Celera 500L would be able to service nearly every city pairing in the United States without refueling.

The reason its aircraft can do all this, says Otto Aviation, is down to laminar flow.

Laminar flow is the minimum drag solution for aircraft surfaces, explains its website, and features smooth layers of airflow with little to no mixing of adjacent layers.

The Celera 500L’s fuselage takes advantage of an optimum length-to-width ratio to maximize laminar flow. Laminar shapes are also used for the wings and tail sections.

Inside, the cabin is spacious enough, with its 6 foot 2 (1.88 meters) height and six first-class equivalent seats with customizable configuration.

With its aerodynamic airframe meaning it requires a lot less horsepower to achieve takeoff and cruise speeds, the Celera 500L is powered by the RED A03 engine. It has a liquid-cooled V12 twin six-cylinder bank and, says Otto Aviation, offers best-in-class efficiency. It’s certified to operate on Jet A1 and biodiesel.

While the newly unveiled plane is window-free, Otto tells CNN Travel that the passenger version will have windows, and has shared this rendering. “The windows will not have an impact on laminar flow, as they are mounted flush and have the same contours as the exterior shape of the fuselage,” he explains.

This rendering shows the passenger version of the Celera 500L.

Otto Aviation has completed its first funding rounds and those successful test flights, but they still need to begin the FAA certification process, find a location for a manufacturing facility and create an initial order book. All amidst an industry which has been decimated by a pandemic which has been keeping people in their homes and out of the air.

“Launching amid the current aviation landscape has only bolstered what we aim to provide with the Celera 500L,” declares Otto to CNN Travel. “We believe that when the price of private air travel is competitive with commercial air travel, an enormous market opportunity will result.”

If the air-taxi market becomes more commercially viable, and more affordable, it’s easy to see how it could be attractive to the consumer.

“Of course, we didn’t anticipate Covid-19,” says Otto, “but there are enhanced market opportunities in being able to afford to fly with only those you choose to. Being able to avoid crowded airports and lines is another big benefit.

“In many cases, individuals and families will be able to charter the Celera 500L at prices comparable to commercial airfares, but with the convenience of private aviation.”

Celera XL could have another application as a cargo plane. E-commerce is one of the big winners of the pandemic and with consumers valuing next-day or even same-day delivery, the neat and economical Celera 500L could help facilitate this by flying more direct routes into regional airports.

The company also has visions for the Celera 1000L, whiich is the Celera 500L scaled up 20% while maintaining its laminar flow. This means close to doubling cabin size, allowing more passengers or more freight.

If FAA certification and finding a manufacturing facility goes to plan, we could see the first commercial deliveries of the Celera 500L by 2025.

If air taxis become a reality in the post-Covid era, there are other rivals to the Celera 500L we might one day see in our skies.

Boston-based Transcend Air is also working on competitively priced city-to-city trips in six-person planes, again with a pre-pandemic launch date of 2024.
And in January this year, Uber and Hyundai revealed they are working on a four-seater electric flying vehicle that can be summoned by app. At that time, the prototype was scheduled to be ready in 2023.

The story has been updated with new information regarding the passenger version of the Celera 500L, which unlike the test plane, will have windows.