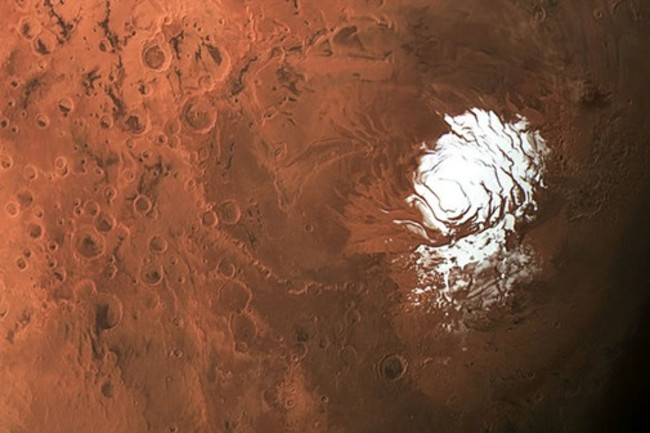 Two years ago, planetary scientists were abuzz with the potential discovery of a subsurface lake on Mars — buried deep beneath layers of ice and dust at the planet’s south pole.

Now, new research adds more weight to that possibility, suggesting there is not just one but several briney lakes.

These aquifers would represent the first known martian bodies of liquid water — albeit extremely salty water. Taken with other recent discoveries — such as lakes beneath the surface of the dwarf planet Ceres — it is part of a growing picture that liquid water is more widespread in the solar system than previously thought.

In 2018, an Italian team of researchers announced evidence of salt water beneath the southern polar cap of Mars: the radar sounder of the ESA Mars Express orbiter had detected unusually bright, reflective patches below the ice. This, the researchers argued, could be a lake of liquid water 12 miles (20 kilometers) across that melted from the ice cap and was trapped beneath it, over a kilometer beneath the surface.

On Earth, similar lakes form beneath glaciers, where heat from the ground and the pressure of the glacier above melt some of its ice. And although Mars is too cold for pure water to remain in liquid form below its glaciers, it could do so if it were extremely salty with a much lower freezing point, the team says. This briney mixture might be filled with salts called perchlorates, dissolved from rocks.

But it wasn’t a slam-dunk case. Mars is not very geologically active, and it’s not clear whether the planet’s interior can supply the amount of heat to create a lake of that size.

Now, the team is back with a new study, published September 28 in Nature Astronomy, that they say bolsters their argument.

The team returned to data from the Mars Express radar sounder, called MARSIS (Mars Advanced Radar for Subsurface and Ionospheric Sounding). This time they analyzed a dataset of 134 radar profiles, compared to 29 in their previous study.

They also brought a new approach, adapting radar techniques used by satellites orbiting Earth to image buried geological features. Their analysis looks not just at how bright an area is but other metrics as well, such as how the signal strength varies, indicating how smooth the reflecting surface is. Previously, this method has found subglacial lakes in Antartica, Greenland, and the Canadian Arctic.

By running their analysis on sounding data collected by the spacecraft over the previously-identified bright area and comparing it to surrounding regions, the team could see major differences in their characteristics that suggested the presence of liquid water, strengthening the evidence that the original bright patch is indeed a salty lake.

In addition, they spotted other, smaller areas that met their detection criteria for liquid water — or came close, suggesting they’re ponds or mucky sediments.

The prospect of these underground, salty lakes also add an intriguing wrinkle to the debate about whether life could exist on Mars today. The extreme salt content doesn’t sound hospitable for life, but some researchers think it could be possible. A recent paper by a pair of researchers at Harvard University and the Florida Institute of Technology (FIT) also addressed the possibility of life in underground environments on Mars and even the moon.

“Extremophilic organisms are capable of growth and reproduction at low subzero temperatures,” said Harvard’s Avi Loeb, one of the study authors, in a press release. “They are found in places that are permanently cold on Earth, such as the polar regions and the deep sea, and might also exist on the moon or Mars.”

In their paper, published September 20 in The Astrophysical Journal Letters they calculate that even without the addition of salt, liquid water is possible on Mars several miles deep. And although any life at those depths would be subjected to crushing pressures from the rock above, some known single-celled organisms can survive them.

One thing is certain: actually searching for such life will require drilling technology far beyond what we are capable of sending into space at the moment. But, write Loeb and his coauthor Manasvi Lingam of FIT, NASA’s Artemis program could pave the way for such subsurface exploration by returning humans to the moon — beginning as soon as 2024.

Why Do People With Alzheimer’s Go Back in Time and ‘Relive’ Their Past?