Home Sport Arteta: Lacazette not to blame for loss 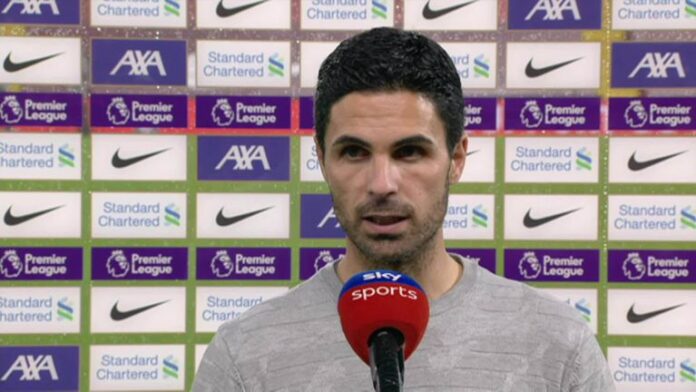 Arsenal manager Mikel Arteta wants to see his players frustrated following the 3-1 defeat at Liverpool but apportioned no blame to Alexandre Lacazette following his crucial miss.

Sadio Mane, Andy Robertson and Diogo Jota, on his home debut, all scored after Lacazette had been gifted the opener following a Robertson error to make it 61 home league matches unbeaten – just two short of the club record set between 1978/81.

Had the France international been sharper in front of goal, he could have made it 2-2 in a one-on-one with Alisson and when he was substituted 15 minutes from time, he covered his face with his shirt as he sat down on the bench.

“Obviously he had the best chance in the game to make it 2-2, and then again put us in a really strong position, but he had a great game,” Arteta said.

“He put in another incredible performance and I’m pleased with him. I want to see my players upset and angry when we lose a game.

“It is a really tough place to come, they are a really good side. We stayed in the game for almost the whole match.

“Having took the lead, we should have held that situation a bit better. We conceded the goal too early.

“We competed well knowing the difficult moments you will have when you come to Anfield; when we had the clear chances to make it 2-2 we didn’t take them.

“They want to win and this is what they are like, the mindset of the team. They go to any ground and want to win. They really believed we could come here and do it and for large periods of the game we were there.”

‘They are huge opportunities that you have to take’

“Lacazette could have taken it through, had a better touch. He should have put the ball into the back of the net, get into good habits.

“They are huge opportunities that you have to take. It was the middle of the goal.

“We have to credit the goalkeeper for standing up but you don’t get many of those opportunities against Liverpool and you have to take them.”

Klopp: Liverpool have to improve

Meanwhile, Liverpool manager Jurgen Klopp dismissed suggestions his side had sent out a statement with their third victory in as many Premier League games to start the new campaign.

Jota’s late strike made it 400 goals in 185 league matches for Klopp, faster than any other Liverpool manager, and they should have probably had more.

“We don’t make statements – in press conferences from time to time, I have to do it because you ask questions,” said Klopp.

“We have to improve. We have to become consistent. So far, we have played quite well but that’s all. It was good, a really good game, I pretty much loved each second – I didn’t like the goal we conceded but the reaction I liked a lot.

“Against a top team in form, playing like we did tonight, it is really something to be honest. We were dominant, played good football, were difficult to defend against, played some really good stuff.

“Arsenal had not too many but some chances because they have real quality, I think most of their chances were offside but Ali (Alisson Becker) made a save any way. It was a really good performance.”