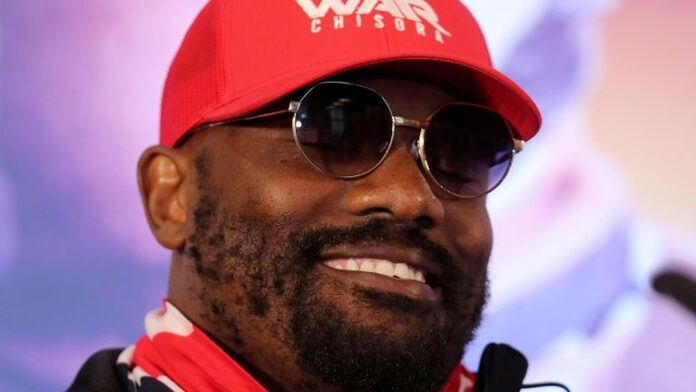 Derek Chisora has warned Oleksandr Usyk “I’m stronger, crazier and I want it more” than anybody in the heavyweight division.

Chisora can end Usyk’s undefeated record and claim his status as WBO mandatory challenger when they collide on October 31, live on Sky Sports Box Office.

“I am not losing. I’m going all out, guns blazing,” Chisora told Sky Sports.

“It’s not about how much I want it. You know, when you want something badly, what you will do for it. I’ll go through this man. Whatever he has got, he’ll need more to stop me.

“The way I will come for him will be unbelievable. I will go through him.

“I don’t think, in the heavyweight game, there is anybody stronger than me right now.

“I’m stronger, crazier and I want it more.”

Usyk has moved up a division and is the mandatory challenger to Joshua’s WBO belt.

His co-promoter Alexander Krassyuk, who works alongside Eddie Hearn, told Sky Sports: “He has agreed to let AJ versus Kubrat Pulev happen, with regards that the winner fights him next. This statement is still solid.

“Our plan is: A) beat Derek Chisora, B) push AJ to comply with WBO rules or vacate the title, C) defeat AJ (or any other WBO champion or contender and become the heavyweight champion. Simple and practical.”

Chisora, however, does not preoccupy himself by worrying about future opportunities even if he inherits Usyk’s opportunity at the WBO title.

Chisora described his ambition: “I don’t want to let myself down. Nothing else. I want to give my all.

“When it’s all said and done I don’t want to look back and say, ‘I should have done better in this fight’.

“I want to let it all go so when I hang up the gloves I don’t have regrets. That’s the motivation I have.

“For me? It’s not about being in top 10, it’s about giving the best fights to the fans.

“Every time you wake up, the rankings are different, it doesn’t faze me. How many people are interested to see me fight? The rankings don’t matter to me.”

A night not for the faint-hearted😬 pic.twitter.com/DT1GW9GJX5

Chisora insisted his ideal world title challenge would come against Fury, to whom he has already lost twice, instead of Joshua.

“Tyson is unbelievable – the only man who doesn’t have a defeat on his record,” he said

“It would be a great fight with the ‘Gypsy King’ because he has always promised me a third fight. He owes me it.

“We speak every day, he always says he wants to give me that fight.”

Chisora’s former enemy and current manager David Haye told Sky Sports: “What Usyk doesn’t understand, the heavyweight division is very different from every other division in boxing. It’s about size, it’s about weight and one shot.

“Ask Alexander Povetkin. One shot it takes to turn the tide. Anything can happen. In the heavyweight division, it’s so up in the air.

“But when Derek is doing what he’s been doing in sparring against good quality opposition every day, the gaps that he used to have are getting filled in with good quality action.

“He’s going to cause an upset and it’s going to shock so many people.”