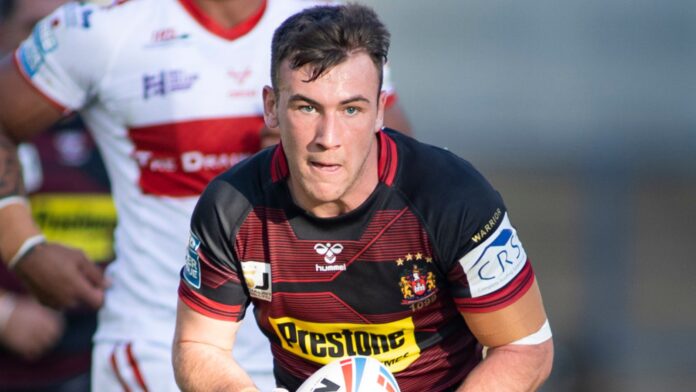 Harry Smith could hardly ask for a better place than Wigan Warriors to be learning his trade as a Super League half-back.

Every day, he goes to train alongside reigning Man of Steel Jackson Hastings and ex-New Zealand international Tommy Leuluai. As well as that, the 20-year-old has former Papua New Guinea and Wigan half-back Adrian Lam as his head coach.

Lam’s commitment to bringing through the next generation at the Warriors is benefitting Smith too and, ahead of a likely appearance in Tuesday’s derby against St Helens, he could hardly be happier with his current situation.

“As a young half-back in the league, I think I’m in probably one of the best positions,” Smith said. “You’ve got Tommy, international; Jackson, Man of Steel; Adrian, former international.

“I’m just in a really good position and I’m trying to pick their brains every session, any video just really looking to learn and develop my game.

“Lammy gives you a lot of confidence with giving you opportunities and saying he’ll back you no matter what. He says he trusts you’ll do your job for the team, so it’s really good all round.”

Despite his relatively tender years, Smith, who made his Super League debut for Wigan in February after spending 2019 on loan at Championship side Swinton Lions, could well be one of the more senior players in the Wigan team to face Saints.

Lam has made 10 changes to his 21-man squad from the team which beat Wakefield Trinity last Friday, with an eye on this Saturday’s Challenge Cup semi-final against Leeds Rhinos.

At least two of the six youth players he has named are in line to make their debuts, which could include full-back Umyla Hanley – son of the great Ellery – and ex-London Broncos back row Kai Pearce-Paul.

It is a similar story in the first game of the night as Warrington Wolves head coach Steve Price is set to hand debuts to academy trio Cole Oakley, Nathan Roebuck and Connor Wrench, with Riley Dean and Josh Thewlis set to make their first Super League appearances since June last year.

“They were elated,” Price told the Warrington Guardian about his debutants. “A couple of them were quite emotional – especially their families.

“I just want to see them go out there and represent our colours with pride and enjoy the occasion.”

Centre Roberts is a Wales U19 international and has already agreed to spend the 2021 Championship season on loan at Swinton, while hooker Aspey is excited by what the future holds for him.

©️ The captain has also been brought back into Ian Watson’s 21-man squad!

“I just feel really comfortable here and I am really happy to see where it goes from here,” Aspey told Salford Now earlier this year after signing his first professional contract.

“I think it’s good for Salford, you always see the big clubs like Wigan, Warrington and St Helens bringing through youth all the time.

“Over the last few years, it’s never really happened in Salford. Signing young players again is definitely a step in the right direction.”

It has been a similar story across Super League this year, with the pandemic-affected 2020 season opening up more opportunities for younger players to show their ability.

What an experience yesterday! Unreal feeling beating Australia. Onto next week now🏴󠁧󠁢󠁥󠁮󠁧󠁿🏴󠁧󠁢󠁥󠁮󠁧󠁿@England_RL pic.twitter.com/sCVgPt01fe

Several of those already starring on the big stage were part of the England Academy team which beat the Australian Schoolboys 14-8 in December 2018, including a player who has been starring for the other team involved on Tuesday, St Helens, in Jack Wellsby.

Smith, who was named man of the match and was one of five Wigan players involved that day, is delighted to see so many youngsters underlining their potential.

“It’s always good to see lads you know and have played with or against making the step up,” Smith said.

“It’s just exciting really that team we had at Australia, there are a lot of good players in the squad who could definitely play Super League in the future. It’s exciting times.”