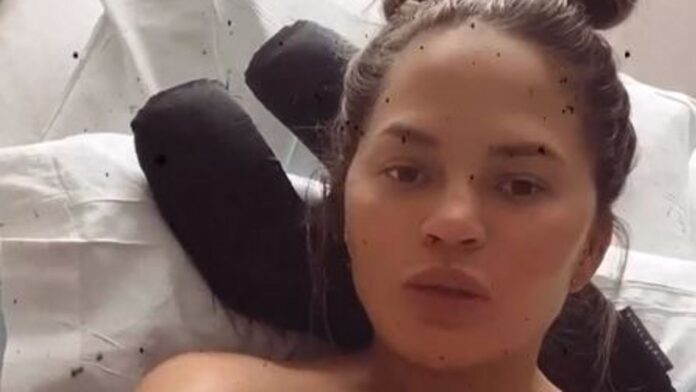 Pregnant Chrissy Teigen has reassured fans she and her unborn baby are “completely fine” after a second night in hospital.

The TV presenter and author is expecting her third child with singer-songwriter John Legend.

On Sunday, the cookbook writer was taken to a hospital in Los Angeles due to excessive bleeding.

The 34-year old has been documenting her pregnancy on social media and gave an update from her hospital bed while preparing to have a second blood transfusion.

She wrote on Instagram that it “truly truly truly sounds more dramatic than it is”.

Teigen added: “It’s an IV, but instead of fluids, the blood of some kind human being out there.”

She said she and the baby – a boy – are “completely fine” – but she misses walking, cooking and playing with her other children.

The star shared a number of videos on Sunday, explaining her bleeding issues have been occurring for “little less than a month”.

“We’re talking more than your period, girls, but definitely not spotting,” Teigen said.

“A lot of people spot and it’s usually fine. But mine was a lot.”

Teigen told fans her baby is “so healthy” and “growing stronger” than her other children, four-year old daughter Luna and two-year-old son Miles, at the same age.

“He’s moved so much earlier than they ever did. He’s like a roly-poly. We have like a million great pictures of him. He’s just so different than they were.

“So he’s so strong and I’m just so excited for him because he’s so wonderful and just the strongest little dude, so I can’t wait for him.”