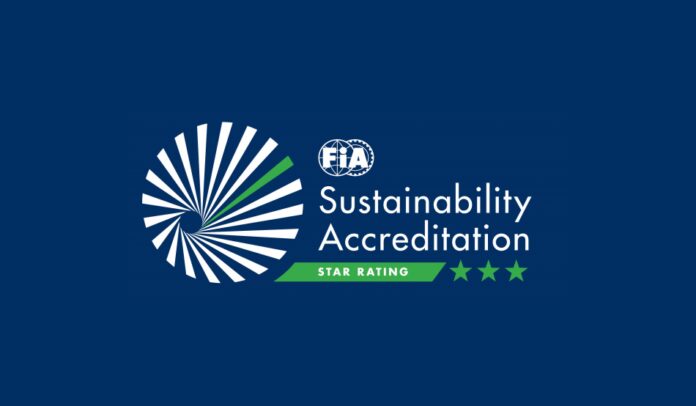 The Fédération Internationale de l’Automobile, the governing body of world motor sport, has today announced that the Mahindra Racing Formula E team has been awarded Three-Star Certificate of the FIA Environmental Accreditation Programme. This programme aims to help motor sport stakeholders to measure and enhance their environmental performance. Mahindra Racing is the first Formula E team to be awarded the certificate that will be necessary to enter the ABB FIA Formula E World Championship from season 9 onwards (2022-23).

The announcement of Mahindra Racing’s achieving FIA Environmental Accreditation Programme status follows the recent announcement by Formula E Holdings that the ABB FIA Formula E Championship has become the first sport to be certified as carbon neutral since inception. Formula E was also the first FIA championship to achieve Three-Star status in 2014 and holds it since then. Signatory of the United Nations Framework Convention on Climate Change, like Formula E Holdings, the FIA has made the Environment one of the four key pillars of #PurposeDriven, the movement launched to increase motor sport and mobility’s contribution to society.

This accreditation programme has been in place since 2012. By introducing clear and consistent environmental management into motor sport, it provides stakeholders with a three-level framework against which to accredit their respective activities. At a meeting held in Geneva in March, all the ABB FIA Formula E teams committed to embracing the FIA Environmental Accreditation programme. After an initial accreditation process for Season 7 (2020-21) entry, a Two-Star certificate – involving the application of good practices – will be necessary to enter Season 8 (2021-22). The highest accreditation level (Three-Star) will then be required to compete in season 9 (2022-23), the point at which the Gen 3 race cars will be introduced.

The FIA Accreditation relies on international environmental certification roadmaps and best practices such as those in the ISO 14001 standard but was specifically developed to fit all FIA stakeholders. All applications are evaluated by an accredited ISO auditor.

Above all, the sustainability teams of the FIA and Formula E are working hand in hand with the manufacturers and teams to support the changes required. Their approach has also involved, for example, making a carbon calculation tool freely available to FIA Three-Star accredited stakeholders. This is an online platform, which allows teams to define their organisational footprint using internationally-accepted standards and measure progress on a yearly basis.

Jean Todt, FIA President, said: “As sustainable and responsible motor sport is a priority for the FIA, I am pleased that Mahindra Racing has achieved this milestone. Energy efficiency is in the DNA of the FIA and Formula E and this new step forward is another proof of our commitment to environmental best practice.  I now urge the other teams to walk in the footsteps of Mahindra Racing.”