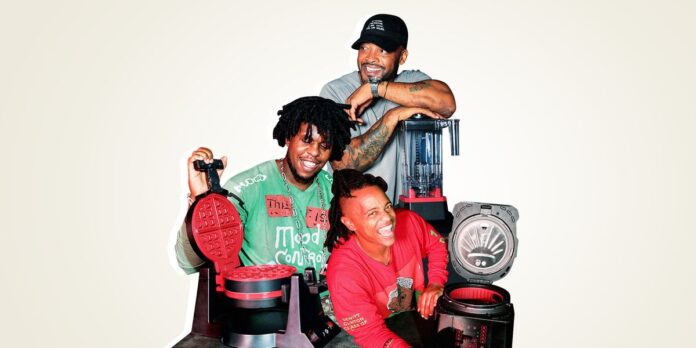 A recent photo on Ghetto Gastro’s Instagram shows an olive oil-laden cake, finished in a crisscrossing pattern of white LVs and four-pointed stars—the Louis Vuitton Damier. “Eat up the drip,” Ghetto Gastro co-founder Chef Lester Walker captioned it. Before that, the team was advertising an Instagram Live hosted by themselves and Samin Nosrat, the woman who reacquainted us all with the wonders of salt, fat, acid, and heat, for New York Times Cooking. Tonight, Ghetto Gastro’s got Matty Matheson of Vice’s Munchies fame talking with co-founder Jon Gray about his new, homestyle cookbook in a virtual event put on by the Strand bookstore in New York.

The collective, which began in part to showcase the culinary excellence of the Bronx, has cemented itself as the “Black Power kitchen of tomorrow,” intertwining the issues of racism with food insecurity, to name just one talking point. It disperses cooking vibes, urges followers to vote, sells seriously cool merch, and spurs hard conversations about inclusion and inequality in the food world. And as that little snapshot of Instagram activity shows, Ghetto Gastro, under co-founders Walker, Gray, and Pierre Serrao, is tapping into a culinary corner of the internet that’s young, passionate, and hungry.

So it makes a whole lot of sense that it’d join up with Crux, a New York-centric cookware brand (you might recognize its air fryer), on a new line of kitchen appliances. Those appliances are striking in appearance. The cause behind them is even more so: All the proceeds of sales from the Ghetto Gastro x Crux collaboration through October will go to Colin Kaepernick’s Know Your Rights Camp, which is working to empower the next generation of Black and brown leaders. That certainly sweetens the deal.

Starting today, Williams-Sonoma is exclusively selling the collection, which you can check out below. Give your kitchen a new look, or start building an appliance collection from the ground up. Either way, you’ll know the money’s going to something that matters, for a product designed by kitchen pros. We regularly get excited about clothing collabs. Now, we’re excited about this kitchen appliance collab.

Crank out eight Belgian-style waffles in 10 minutes. If you use Ghetto Gastro’s recipe, which calls for cocoa powder, chocolate syrup, and chocolate chips, they’ll turn out black and crispy—unlike any other waffle you’ve eaten, we’ll bet.

2020 is the year of many very, very bad things. But on the good side, we’ve attempted to learn to make bread. This maker has 15 settings (like French, Gluten-Free, and Sandwich) for better homemade loaves.

The most subtly designed appliance of the lot, this coffee maker can be programmed 24 hours in advance to make a cavernous 14-cupper at the strength you want.

A toaster oven with 10 functions, like this one, is hardly just a toaster oven. Bake pizza, toast bagels, air fry sweet potatoes, and more.

The GG x Crux collab features a regular toaster, too.

Not just an air fryer, not just a pressure cooker. Both in one appliance.

Sarah Rense Sarah Rense is the Associate Lifestyle Editor at Esquire, where she covers tech, food, drink, home, and more.