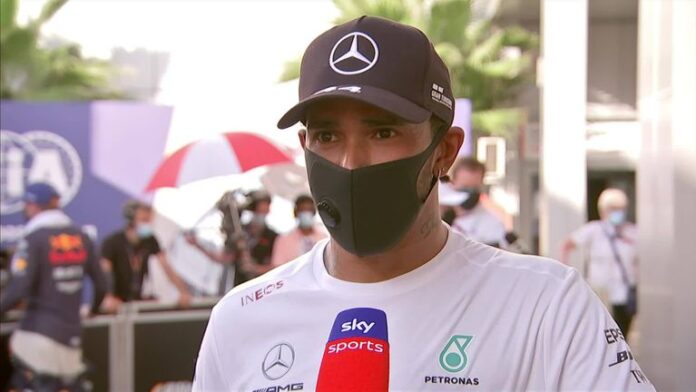 “I may not always react the way you want me to when tensions are high, but I am only human after all,” says Hamilton on social media

Lewis Hamilton has admitted he “may not always get it right” following his critical comments at the Russian GP, but says he is “only human” and has vowed to learn from a frustrating weekend.

While Hamilton rowed back shortly after in Sochi and said he did not feel targeted, he again stated his belief the regulations were being changed to aid other drivers and teams and “keep racing exciting”.

In his first social media post since Sunday, Hamilton reflected:

“I may not always get it right in the face of adversity. I may not always react the way you want me to when tensions are high, but I am only human after all and I am passionate about what I do.

“I’m learning and growing every day, and I’ll take my lessons and keep fighting on to the next one. Thank you to those who continue to support and are right there fighting with me. Still we rise!”

Mercedes, whose radio instructions played a big part in Hamilton picking up penalties, backed the Englishman after the race, with team boss Toto Wolff insisting he is treated “harshly”.

Asked about Hamilton’s ‘trying to stop me’ comments, Wolff explained: “I think Lewis has faced a lot of adversity in his life and for all of us, the penalty seems a little harsh. Never before has a pre-race or reconnaissance lap infringement been penalised with an in-race penalty. That’s new.

“Things go against him harshly sometimes. I guess if you’re the most successful driver, you have to take that.”

FIA race director Michael Masi, meanwhile, insisted Hamilton was penalised in line with the regulations and was not singled out.

“We have the stewards as an independent judiciary to adjudicate those, and therefore there was an infringement and it doesn’t matter if it was Lewis Hamilton or any one of the other 19 drivers, if a breach has occurred of the regulations they will consider it on its merits,” the FIA race director was quoted as saying by F1.

“And also further to that I would say adjudicate it equitably and fairly in the circumstances, taking all of the key elements into account.”