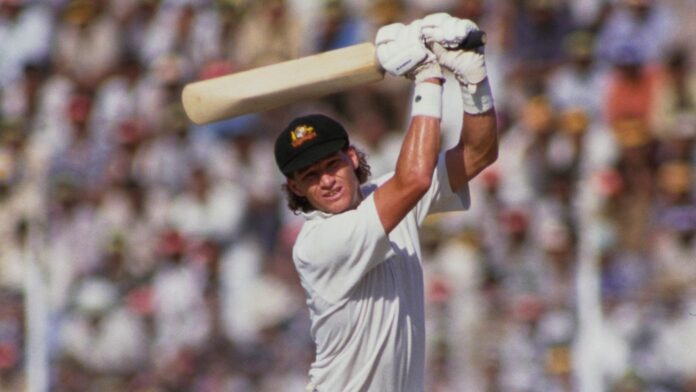 We have heard many times since his premature passing that Dean Jones was ahead of his time – not just as a batsman, but as a master tactician, especially in the shorter form of the game.

Jones played his final ODI on April 6 1994. It was the 902nd one-day international to be played since the format started by accident in January 1971.

To put it into perspective, there have now been more 4,000 matches played, so Jones’ career took place exclusively in the first quarter of the format’s history. At the end of his career, here are how the leading run-scorers in the format stood:

The only player to have scored more runs at a higher average and a higher strike rate in that time period was Viv Richards. Not bad company to be in. If Jones’ strike rate of 72.60 appears low by today’s standards, it should be remembered that the overall strike rate in ODI cricket up until his final match was a mere 72.37 so he was able to combine run-scoring and preserving his wicket without having to off-set his scoring rate.

He was instrumental as an unfancied Australian team won the 1987 World Cup in the subcontinent. He failed to reach 30 only once in eight matches during that tournament, which included an innings of 33 in the final against England at Kolkata.

His star continued to rise and he reached top spot in the ICC ODI batting rankings in October 1989 after an innings of 85 against Sri Lanka at Goa. The following year he struck three centuries in the space of six ODIs and made his career-best innings of 145 against England at Brisbane during their 1990-91 tour.

In all, he spent 1,161 days as the top-ranked ODI batsman in period from 1989 to 1993, before Brian Lara took his crown. To this day, only five players have spent more days in top spot.

Most days as No 1-ranked ODI batsman

He was just as successful in the longer form – averaging a stellar 46.55 from his 52 Tests. After a baptism of fire against the all-conquering West Indian team in early 1984, he was recalled for the tour of India in 1986 and made a mark in what was just his third Test.

Entrusted with the crucial No 3 position by Allan Border, he responded by batting for more than eight hours in compiling 210. He was so dehydrated at the end of his innings that he was promptly taken to hospital and put on a drip. That innings remains the highest individual score by an Australian in India, and set the scene for what would become just Test cricket’s second tied match.

A first Ashes century followed in the 1987 New Year’s Test at Sydney – a match overshadowed by Peter Taylor’s debut performance but it brought about Australia’s sole victory in what would be their last home Ashes series defeat for 24 years.

He struck two centuries on the all-conquering 1989 tour of England which could have ended early for him after he had his cheekbone fractured by Sussex’s Tony Pigott. His success continued that winter as he struck twin centuries against Pakistan at Adelaide.

His Test career ended on a high, with two unbeaten centuries in his last four Tests before he was controversially jettisoned at the end of Australia’s tour of Sri Lanka in late 1992. With the debuts in the next couple of years of Justin Langer, Damien Martyn, Michael Slater and Matthew Hayden, the Australian top-order was able to go from strength to strength, and so the premature end of his Test career was not felt quite so much as it might have been had fate dealt a different hand to the national side.

The following year he made headlines by asking Curtly Ambrose to remove his wristband in an ODI at Sydney. He probably regretted it afterwards as the West Indian paceman roared back with figures of 5-32 to condemn Australia to a 25-run defeat. In 1994 he was dropped from the Australian side before the final ODI on their tour of South Africa and promptly retired.

He continued to be a colossus at domestic level, striking an unbeaten 324 for Victoria against South Australia at the MCG in February 1995. And in 1996 he joined forces with fellow Victorian coach Les Stillman and led Derbyshire to second place in the County Championship, their highest finish since winning the title in 1936.

He led from the front, scoring 2,653 runs in all competitions, and inspired his fellow batsmen Kim Barnett, Chris Adams and Adrian Rollins. With the firepower of Devon Malcolm, Dominic Cork and Phil Defreitas at his command, the county were always likely to win matches with the ball, but that year saw everything finally fall into place.

Alas it all went sour the following year and he returned home mid-way through the season, which set into action a fall-out which saw many senior names depart from the county.

Jones played one further year in Australia before retiring and moving into coaching and commentary. He won the Pakistan Super League twice with Islamabad United and was most recently the coach of the Karachi Kings in the 2020 edition of the tournament which was cut short due to the coronavirus pandemic.

Controversy was never too far from him and he was sacked after a misplaced comment about Hashim Amla when he thought he was off-mic, as well as resigning his Life Membership of Cricket Victoria claiming the organisation was being badly run and not showing enough respect for past players.

However, he made an indelible mark on any players who sought him out for advice and was a popular member of the IPL commentary team when he sadly passed away.